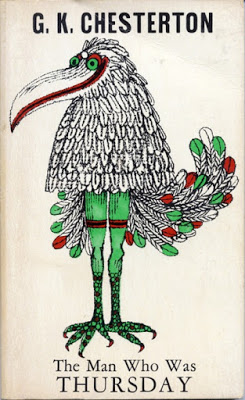 “He remembered a hornbill, which was simply a huge yellow beak with a small bird tied on behind it. The whole gave him a sensation, the vividness of which he could not explain, that Nature was always making quite mysterious jokes. Sunday had told them that they would understand him when they had understood the stars. He wondered whether even the archangels understood the hornbill.”

About the book: The Man Who Was Thursday is a metaphysical thriller written by G. K. Chesterton. It was first published in 1908, and is often considered to be the author’s best work.

Summary: The Man Who Was Thursday is the story of Gabriel Syme. He is a poet-turned- detective from Scotland Yard, who goes undercover to infiltrate the Council of European Anarchists. The Council consists of a group of eccentric characters, whose codes names are the names of the seven days of the week; Syme becomes the new Thursday. It is now up to him to stop the planned assassination of the Czar and the French president, without getting caught in the process.

My Thoughts: The Man Who Was Thursday is less than 200 pages and a quick read. It is also a fun read! I read the book in one sitting. When I was done, I couldn’t exactly form full-sentenced thoughts. The words that popped up in my mind were…. Nightmarish, literally. Wild. Bizarre. Surreal. Intriguing. Witty.
What I found wild was the fast pace, the kind that makes the book seem less like a metaphysical thriller and more like a spy novel. The plot races across the pages. The novel is an allegory, a great one, because it does not even try to convince you that it is literal. It is, at times, strange and eccentric and that makes it even more fun. You cannot miss a single detail and you just have to read between the lines. There are times when you lose track entirely of the many twists and turns in the plot; I’ll admit I was sidetracked a couple of times and I had to re-read a couple of paragraphs, but it’s intriguing how each time you re-read something, the deeper, intended meaning becomes clearer. The language is beautiful, though it does take getting used to. If not anything else, this book lets you experience the author’s way of simply playing with words.
Look at it one way and it’s a mystery novel, otherwise it’s a satire, or even a thrilling fantasy. The emotions involved in the book and the ideas about laws and religion and war, humanity and anarchy are all still very relevant. So whichever way you look at it, though written in 1908, the novel is timeless. I couldn’t write more about the plot or the ideas, without spoiling the book for you. This book is certainly a must read.
This review is a part of the What’s in a Name Challenge for “something on a calendar” hosted by Beth Fish Reads.

5 thoughts on “The Man Who Was Thursday by G. K. Chesterton”