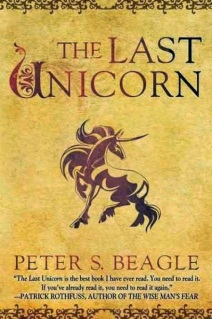 This time for Once Upon a Time, I’d decided to read some of those books that I find people from other corners of the world raving about, starting with The Princess Bride by William Goldman. I spent my childhood reading an assortment of fairy tales, then Enid Blyton, later Harry Potter and the occasional Roald Dahl. I can’t say I enjoyed many classics. For the last couple of years, I tried my hand at all the books, especially fantasy, that fellow readers read as they grew up – from modern authors like Diana Wynne Jones to good oldies like C. S. Lewis. So with that in mind, I decided to read The Last Unicorn by Peter S. Beagle.

Instead of a dull summary and review, here’s what you get. FIVE Reasons You Must Read THE LAST UNICORN by Peter S. Beagle:
1. There’s a horrible king, a curse by a wicked witch, there’s a wizard and a forest full of magic, and then you have an immortal unicorn. But this book is still not your typical medieval fantasy. When the last unicorn in the world sets out one day to find out where the rest of her kind went, she is trapped by a travelling carnival of sorts, where she is displayed along with other creatures, a lion magicked into a manticore, a poor dog disguised as the mighty Cerberus; a spider tricked into believing itself Arachne, a magician who can’t control his magic and a real harpy. But the unicorn is freed by the not-quite magician Schmendrick, who accompanies her on her quest to find the Red Bull, who has chased all the unicorns out of the world. The twists and turns make the story enchanting, but it’s most rare because it knows itself, it’s an unusual fairy tale that is self-aware.
The true secret in being a hero lies in knowing the order of
things. Things must happen when it is time for them to happen.
Quests may not simply be abandoned; prophecies may not be left to rot like
unpicked fruit; unicorns may go unrescued for a very long time, but not
forever. The happy ending cannot come in the middle of the story.
2. But then, it also has tradition. It has rhyme; songs and ballads; at one point, it has Robin Hood, though we all know he’s not real. There are singing birds and a butterfly who can make sense of nothing but poems his whole short life. There’s Madame Fortuna, who runs a carnival and sings the song of old age.
Song of Elli

What is plucked will grow again
What is slain lives on,
What is stolen will remain —
What is gone is gone.

What is sea-born dies on land,
Soft is trod upon.
What is given burns the hand —
What is gone is gone.

Here is there, and high is low;
All may be undone.
What is true, no two men know —
What is gone is gone.

Who has choices need not chose.
We must, who have none.
We can love but what we lose —
What is gone is gone.
3. And it has descriptions that make you heady.
Her neck was long and slender, making her head seem smaller than it was, and
the mane that fell almost to the middle of her back was as soft as dandelion
fluff and as fine as cirrus. She had pointed ears and thin legs, with feathers
of white hair at the ankles; and the long horn above her eyes shone and
shivered with its own seashell light even in the deepest midnight.
.
Outside, the night lay coiled in the street, cobra-cold and
scaled with stars.
.
Men have to have heroes, but no man can ever be as big as
the need, and so a legend grows around a grain of truth, like a pearl.
.
The sky was still black, but it was a watery darkness
through which Schmendrick could see the violet dawn swimming. Hard silver
clouds were melting as the sky grew warm; shadows dulled, sounds lost their
shape, and shapes had not yet decided what they were going to be that day. Even
the wind wondered about itself.

4. But it’s not only the imagery that grips you. It has characters so real you’ll find yourself in them. They are human, and I guess unicorn and wizard and eccentrically butterfly, but even in their dissimilarity, you find what it is to be human. You could owe it to the narrator who makes all characters unlike your fantasy tropes. Prince Lir, the hero, is valiant as only a prince can be, and he’s compassionate, but you’re not told it.
As a hero, he understood weeping women and knew how to
make them stop crying – generally you killed something – but her calm terror
confused and unmanned him, while the shape of her face crumbled the distant
dignity he had been so pleased at maintaining. When he spoke again, his voice
was young and stumbling.
5. But more than anything, it has insight. Such great insight into people, mortality, selfless love and dwindling belief; that you wonder how a kid is supposed to understand it, then you realize he would and then you recognize that the book is right up there with the bests of fantasy; the books that tuck away great meaning under layers of intrigue, so that when you’re done, you’re overjoyed and also kind of melancholic, and filled to the brim with thoughts you wouldn’t have imagined an entertaining adventure could bring to mind.
We are not always what we seem, and hardly ever what we
dream.