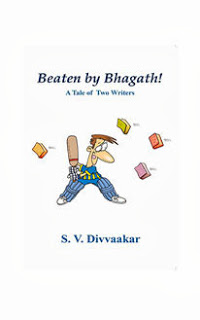 Summary: I’m sure you can do a much better job than Bhagath!’ When BB hears these inspiring words from his sexy lady boss,
his staid life as a successful analyst in an MNC goes into a tailspin.
Bitten by the ego bug and smitten by her, BB sets off on his
quest to write a book that’s better than India’s greatest writer Dr.Bhagath’s
blockbusters. Nothing unusual about this for BB, who likes a good fight. Except
that he and Bhagath had been classmates and friends at college.
What follows is a roller-coaster voyage of the debutant
author and his book, with all its twists and cul-de-sacs. Brushes with
publishers, celebrities, retailers, book chains, and competition with the
alliances among giants, mark the challenger’s journey, upping the stakes at
every stage.
Will BB catch up with his famous friend?  What will their encounter be like?
Written from inside the ring, ‘Beaten by Bhagath’ is a
gripping tale …the first-ever about the unseen side of the wonderland of
Indian fiction.
My thoughts: Here’s a fair warning: this review is about why I didn’t like the book. To be honest, you might like it and reading the rest of this might be a good way for you to find out. By the end, if you wholeheartedly disagree with every word I say, Beaten by Bhagath! by S.V. Divvaakar is just the book for you! If you stopped by simply for a structured and concise review, please, excuse the rant.
Beaten by Bhagath! by S.V. Divvaakar has received quite a load of good reviews on Goodreads. Browsing through them, I realized all over again why when I receive that rare review request from an Indian author and it says, “you’re one of the top Indian book bloggers”, I conclude that it’s an impersonal formatted and thorough suck-up. Because, I’m not. I rarely accept books by new, popular, upcoming Indian authors for review, and the reason is, I generally don’t like them. Since this book was about those very new, popular and upcoming Indian authors and the pathetic desi publishing world, I couldn’t relate to it. The book made some rather interesting points, provided me with pieces of information I wouldn’t have come across on my own, and I’m sure a lot of effort went into creating the book; the timeline certainly made it detailed. I suppose it just didn’t hold my interest.
See the problem with the book, for me, was that it was intended for an entirely different group of readers: those who’d nod their heads, amused at the mention of their possible guilty pleasure Chetan Bhagat and his huge fanbase, or perhaps those who want their books to have a “dictionary-free” language (whatever the hell that means.) The book talked about and starred these so-called aspiring authors, who view themselves as the next Chetan-Bhagats and those who do achieve that ‘standing’: but these are people I haven’t once considered reading! The only thing CB has managed to create, in my opinion, is a world where just about anyone decides to become a writer, likely out of sheer boredom.
That’s not necessarily bad. But I don’t like to read books which are written expressly for people who don’t like to read; for people who find Dickensian descriptions long-winded and boring; who underline words out of library books for about thirty pages and then evidently just give up the effort! I don’t yearn for stories written in a ‘simple language’, I want them written in an apt manner, and if that requires words I haven’t heard before, then that’s okay with me. I think “the gibbous moon” sounds delightfully better  than “the moon, which was more than half, but not quite full”. I like to read well-written books; I want writers who express themselves in ways I wouldn’t have thought possible, I don’t mind the occasional running to the dictionary: in fact, I love all that. If people think that words that they consider ‘big’ are unnecessary or weigh a language down, then they just don’t love language like I do, they don’t quite understand the nuances of rich vocabulary, or get its charm. They read for entertainment and a variety of other reasons that are as important to them as language is to me.
If you are one of those people who thinks Chetan Bhagat is capable of telling stories just as vividly as (let me pick an Indian author I like:) anyone from the oldies like R. K. Narayan to Amitav Ghosh; go ahead and read this book, you’ll probably like it. If all being a writer means to you is ‘beating the metaphorical and real Bhagath’, if you think there can be more to writing advice than a tough-loving “Just sit down and write.”, then this book might actually help you. Despite all its misplaced humour and Hindi-coated English, it does provide that behind-the-scenes look into the publishing world and all its problems.

I received this book in exchange for an honest review.