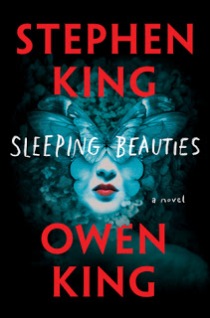 Summary: In a future so real and near it might be now, something happens when women go to sleep; they become shrouded in a cocoon-like gauze. If they are awakened, and the gauze wrapping their bodies is disturbed or violated, the women become feral and spectacularly violent; and while they sleep they go to another place. The men of our world are abandoned, left to their increasingly primal devices. One woman, however, the mysterious Evie, is immune to the blessing or curse of the sleeping disease. Is Evie a medical anomaly to be studied, or is she a demon who must be slain?

My thoughts: I’m so conflicted about this book. I was hooked, there is no denying that – seeing as I left all work aside for a week to finish reading this mountain of a book. It was thoroughly engaging. If you’ve watched IT Chapter 2, you must remember the very self aware running gag on McAvoy’s character, Bill, being called out for writing the worst endings. Many people criticise King for writing anticlimactic endings to his long stories. I don’t agree with most people, but somehow having watched the movie so recently, I’d braced myself for a disappointment at the end of this book. Which is perhaps why it didn’t hurt as much when the predicted disappointment hit. But let’s not get ahead of ourselves.

First, the goods, or the positives: The greatest triumph of SK’s writing for me has always been the uncannily real characters. He can effortlessly hop into the heads of hardened criminals, sociopaths, recovering alcoholics, bullies, angsty teenagers bursting at the seams, mothers, children, you name it. He can write the damnedest realistic characters and he has surely managed that in this book. Not only that, he makes you care for his characters, and choose sides between those you love. Throughout Sleeping Beauties, there are moments of triumph when the characters hit right home. Just right.
The story is a mix of Under the Dome, The Stand, 11/22/63 and perhaps even Mr. Mercedes (specific references aside.) SK has proved before, more than once, that he can do small town mass hysteria and do it well. The authors have pulled it off here too, no surprises there.
And I mean there’s the obvious, the more recent Stephen King charm you get: that brisk no-nonsense dialogue, casual meta references and nods to authors and movies and songs and his own characters, style – just a lot of cocky style. And all this makes it a thoroughly entertaining book, even at its worst moments. I don’t know how much of this is Owen King, but there’s too much Stephen King to miss. Things I was surprised by and like included the element of dark fantasy. I like the allusions and the tricks. I loved Evie and everything she stood for. And above all else, I love the fox’s perspective on the world; animal perspectives are always so difficult to write without sounding too human.
Now to the negatives, the bads: Maybe the book came a little too late. I like the idea of a retelling of a fairy tale in this manner and on this scale, but it just seems strange to have this repeated overwrought discussion on the duality of gender, men and women, men against women, two genders and the very specific dual gender roles.. seems odd to centre the book entirely around this duality in today’s world. It was quite the elephant in the room.
I think at the end of the day, it’s Clint Norcross, the main character (not sure if I should call him a protagonist) who disappointed me the most. When you create a character who has more shades of grey than of white, you better give me a good reason for that. I expected… more. Or I did not understand what I got.
And lastly, I think the scope of the book was too narrow and for no solid reason. In Under the Dome, there is still an explanation for the seemingly arbitrary choice of that particular small town for that particular story. What makes this town so special? Why is the rest of the world so oblivious to this random town in Appalachia where everything of import seems to be happening? Even Under the Dome had more of the external world playing its part. Here, you need to accept it without justification. Too big a story in too small a package.
Final Thoughts: I’m glad I read it. My biggest takeaway is the character of Jeannette – that’s one woman I will not forget easily, one character I’ll keep coming back to. I would recommend it to you if you have the time for it. But there are far greater Stephen King novels to choose over this – when in doubt, when it comes to Stephen King, always go for the classics.


This isn’t exactly a fairytale retelling (hint: kissing the sleeping beauties may not have the predicted reaction) to be part of the Retellings Challenge, but they’ve referenced Sleeping Beauty often enough for me to say it counts.