Skip to content
A few weeks ago, I finally read The Mortal Instruments series by Cassandra Clare after having successfully TBR-ed it for nearly ten years! This was after yet another student recommended it to me. Now teenagers often and easily talk in superlatives, yet this one clung to my mind like a fly in a web. She said: you haven’t lived until you’ve read this series. Coming from a 10 year old, this statement earns a massive eye roll, yet… it got me thinking. Which books, to me, deserve this tag?
This post needs multiple disclaimers. First: Such lists are incredibly personal and there are many books I like simply because of my context, the memories that go hand in hand with reading them, the discussions they have led me to. I’ve tried to remain objective, here, and base my choices on ideas espoused within the books. It’s been grueling, but these are big words to live up to. Each of these books has meant a lot to me, and I do hope that you discover a gem for yourself. Some day, I’ll write a Part 2. For now –

1. Life of Pi by Yann Martel

A part-sermon part-fantasy, this is my favourite book. I have never found it difficult to name one favourite book, because this has had a profound impact on the way I look at life, since the age of around twelve, when I read it. It’s the story of a boy stuck on a lifeboat with nothing for company but the vast waters of the Pacific ocean… and, a tiger. A survival’s tale which seems like an adventure but has terror brewing beneath the surface. It explores themes of spirituality, grief, dealing with crisis. It opens your mind to accepting abstract uncertainty, making you truly open-minded, and moreover, shows you that you have the power to write your own story, for better or for worse.

2. Left Hand of Darkness by Ursula K. Le Guin
A mind-bending science fiction tale of a human emissary to a planet where gender is not fixed for any individual; rather can be chosen and changed at will. Mating only happens at a certain time and it is then that different genders are taken on. To them, humans are a perversion, retaining their genders forever. Our protagonist, the emissary, must reconcile with these differences on his mission to establish diplomatic relations with this planet. The book puts a new turn on the psychology of identity, and how we see us and others in the context of gender. Gives you a new perspective altogether on humans; perhaps controversial, but definitely one that demands introspection.

Favourite quote: “A man wants his virility regarded. A woman wants her femininity appreciated, however indirect and subtle the indications of regard and appreciation. [Here] one is respected and judged only as a human being. It is an appalling experience.”

Myths have power, but this retelling shows you that the true power of story lies in the detail. A fragment of an incident transformed into a novella, Ransom describes an incident in the Trojan war – the moment when King Priam begs Achilles for his son Hector’s body, and the war is momentarily put on hold for his funeral. Many life stories build up to this uncanny display of humanity.
The strange meeting, of the aged father and the murderer of his son, at the centre of an unending war, is a beautiful study of men turned to figureheads at the hands of politics and war, and a mortal ambition to achieve immortality.

Favourite quote: We are mortals, not gods. We die. Death is in our nature. Without that fee paid in advance, the world does not come to us. That is the hard bargain life makes with us — with all of us, every one — and the condition we share. And for that reason, if for no other, we should have pity for one another’s losses. 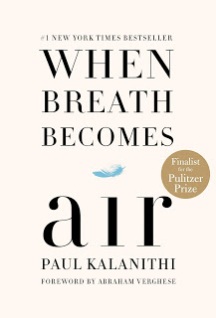 4. When Breath Becomes Air by Paul Kalanithi
A neurosurgeon diagnosed with lung cancer writes about death and what it means to be alive. We watch the irony unfold as someone who sees death on a daily basis ponders his own mortality. Through this memoir, born before his diagnosis, Kalanithi attempts to find the meaning of life. He discusses the point where philosophy and science intersect, as a man who intimately knows and loves both. He talks about the fate of relationships and ties in life and death. In a lucid and intellectual manner, this remarkable book says all the things we are afraid to think, and does so with a cutting clinical brilliance that only a doctor could manage.

Favourite quote: Science may provide the most useful way to organize empirical, reproducible data, but its power to do so is predicated on its inability to grasp the most central aspects of human life: hope, fear, love, hate, beauty, envy, honor, weakness, striving, suffering, virtue.

5. Letters to a Young Poet by Rainer Maria Rilke
Rainer Maria Rilke was a German poet, who received a letter from 19-year-old Franz Xaver Kappus who was a poet himself. He’d sent Rilke one of his poems to critique. Rilke refused, giving the young poet his first lesson, that a good poet does not base his poetry one someone else’s appraisal. A short correspondence followed. Letters to a Young Poet is a collection of ten letters sent by Rilke to Kappus. It is about everything and nothing, life advice from an old soul. A book I think is just mandatory to be read at a young age, but of course, even later in life, as you begin to identify more with the writer than the intended audience.

Favourite quote: Have patience with everything unresolved in your heart and to try to love the questions themselves as if they were locked rooms or books written in a very foreign language. Don’t search for the answers, which could not be given to you now, because you would not be able to live them. And the point is to live everything. Live the questions now. Perhaps then, someday far in the future, you will gradually, without even noticing it, live your way into the answer.


Which books would you qualify this way?