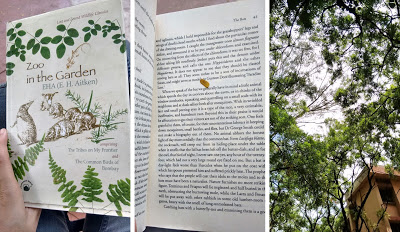 I have found non-fiction much lighter to read in the past few months than fiction, the best of which is too absorbing, dense and intricate. I was delighted to find this gem in the library, a book called Zoo in the Garden which comprised two of the most popular books by E.H. Aitken. EHA was born in Bombay and was one of the founding members of the Bombay Natural History Society or BNHS, a giant name on the biodiversity research and conservation front in India.
The Tribes on My Frontier is set in what is named Dustypore, which could be just about any place in India. Every chapter of the book is dedicated to the little and big creatures which inhabit EHA’s home and surroundings, be it rats, frogs, birds, even pet fowl, butterflies, mosquitoes (the pride of India!) or some larger mammals. He offers humorous character sketches of the animals, along with factual details wherever required. The book is written in the most disciplined manner. EHA strikes out many common myths people have about animals and pests. For instance, the stinky Asian house shrew is only a harmless shelter-seeker often mistaken for the rat which causes all the trouble in houses. (I had no idea!) EHA has the eye of a naturalist and the words of a poet. And the combination gives you a book of science like few others, one that appeals to both the mind and the heart.
I have never understood how particular books could be more suited for certain places. With The Tribes on My Frontier, the idea makes sense. This is an excellent book to read outdoors. I read it in an afternoon on a bench outside the library. As I sat there, I was alarmed by the sudden and conspicuous appearance of all these tiny tribes engaged in their daily business about me. Crows cawing their lungs out, an occasional bulbul, little black ants scurrying across the ground, tiny beetles, the twitter of many other birds, some I recognized. It was just fabulous. Now, I am fairly naturally-inclined, so I generally notice the odd squirrel on the tree and the tiny butterflies and bugs people miss. But even I was not prepared for this rush of activity. Of course, the book only foregrounded what was hidden in plain sight. Post reading The Tribes on My Frontier, I have noticed so much more life around me, it’s wonderful.
EHA speaks about animals with the very tenderness that I found lacking in my recent read of The Fall of a Sparrow by Salim Ali. It may be a simple reflection of a “gentleman’s upbringing” as opposed to Ali’s slightly more unscrupulous childhood. But it is still curious how two people brought up in the same city, who ended up in the exact same field, the same Bombay Natural History Society, though years apart, viewed their work in such contrasting ways. EHA here makes the same distinction that Ali makes between killing specimens and hunting for sport – only he does it better. He condemns taking life for no purpose and claims that his curiosity is not only to study fellow creatures but to form an acquaintance with them. My personal bias finds EHA’s warmth more readily likeable than Ali’s defence for hunting and the strictly scientific interest.
At times EHA sounds far too imperial and I can’t help my immediate throwing-up-of-defenses in such cases. There are other moments too where I do not quite see eye to eye with him. There is a whole chapter on how insufferable he finds frogs. I would be reluctant to, say, kiss a frog, but I do find them kind of cute. That said, EHA’s distaste stems from an incident which he does mention. The tone of the book borders on pompous but I, for one, am fond of that funny stiff-upper-lip P.G. Wodehouse-y writing style. A favourite passage coolly describes the various ways in which spiders murder their victims, but I’d rather not throw that at you out of context. Here is a taste of something different, not my favourite, but more brooding –
Bats have one lovely virtue, and that is family affection. I shall never forget a captive family of demon bats I once saw, the grim papa, the mother perhaps a trifle more hideous, and the half-grown youngster, not quite able yet to provide for himself. There was something very touching in the tender attachment to one another of three such ill-omened objects. Fruit-bats, too, when they go foraging, never leave the baby at home.

A friend of mine has communicated to me, for insertion here, a very affecting story of a bat which he found, prostrate and bleeding, with a mob of dastardly crows seeking its life. Running to the rescue, he lifted it up, and discovered, under its wings, a helpless little infant, which it was vainly trying to save from its ruthless prosecutors. The pathos of the story comes to a head at the point where my humane friend, putting his hand into his trousers pocket, draws out two annas and gives them to a native lad, charging him to protect the poor creature and take it to a place of safety. No one who has any respect for his own feelings will press the matter further, and inquire what the native did when he had received the two annas and my humane friend was gone.


As I fluttered through the pages looking for this, I kept finding more and more quotable quotes and now I want to read it all over again. That should tell you something. Here is another bit and then I’m done –

I have seen a posse of ladies almost disappear into raptures over a ‘quite too awfully delicious’ specimen of a Christmas card, and I was constrained to add some corroborative ejaculations with a tepid effort at enthusiasm; but who would put the prettiest conception in which art ever dressed a Christmas greeting beside that exquisite little butterfly which at this season flits over the barren plains of the Deccan, whose wings of velvet black and intense blue are bordered with peacock eyes of the richest red? And every day thousands of them are born and perish; for, like the bouquet on your table, these little decorations are being constantly renewed, so that they may ever be fresh and bright, and the old ones, before they have time to fade, are case away. Few of them live much over a week.

He then goes on to say how butterflies are more than just art, their peculiar characteristics and how they have adapted to survive their tiny lives. And now, as promised, I’m done!

4 thoughts on “The Tribes on My Frontier by E. H. Aitken”