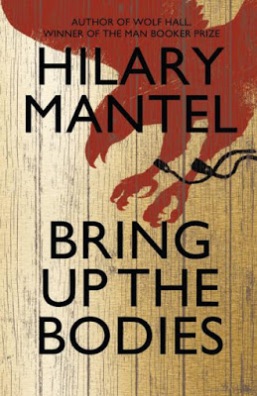 Spoiler alert: Do not read this review unless you are already aware of the history of Wolf Hall. It has been brought to my notice that this review contains spoilers. Well, I’m sorry. It never occurred to me that this could be seen as a plot-oriented novel, in the least… nevertheless, you have been warned.

All of last week, I have been struggling with a review and disinterestedly reading bits of this novel. A creative block of sorts. I realized why this evening. There is no room for new in my mind since I read this most haunting account of the execution of Anne Boleyn. Wolf Hall was amazing. And Bring Up The Bodies makes a fitting sequel. Wolf Hall is about the tides of religious reform in Europe, and the separation of the English church. Here, the focus shifts to the immediate affairs of the court. But what happens in Bring Up The Bodies will have unalterable consequences across the realm for years to come.

Picture this: The year 1555. England has a new church, and a new queen. Anne Boleyn is finally at the throne. Katherine, the first wife of Henry VIII, is on her deathbed, and her daughter Mary is no longer the princess. But the King is still unhappy. Anne has not yet borne him a son to secure the Tudor line. Following a visit to the Seymours at Wolf Hall, a distraught Henry finds himself falling in love with little Jane.
Enter here, the infamous calculating genius of Thomas Cromwell, our unlikely hero and the King’s right-hand-man. With the safety of the nation at stake, Cromwell cooks up a plan that ensures the eventual destruction of Anne Boleyn… ‘As he eases a way through the sexual politics of the court, its miasma of gossip, he must negotiate a ‘truth’ that will satisfy Henry and secure his own career. But neither Cromwell nor Henry will emerge undamaged from the bloody theatre of Anne’s final days.’
The first book in this trilogy went out of its way to shine a positive light on Cromwell. In Bring Up The Bodies, the light flickers. His character now casts beastly shadows reminiscent of the stark image historians have built of him – dangerous, ruthless, the man with the face of a killer. The power of this book lies in Cromwell’s slipping grace, in how it shows a good man turn into the monster that he will forever be known as. In the months leading up to Anne’s arrest, you watch Thomas Cromwell deceive and lie, driven by revenge towards those who wronged his old master, Cardinal Wolsey. He constructs an unshakeable case against the Queen he calls a serpent and seals his own fate as a villain.

He once thought it himself, that he might die with grief: for his wife, his daughters, his sisters, his father and master the cardinal. But pulse, obdurate, keeps its rhythm. You think you cannot keep breathing, but your ribcage has other ideas, rising and falling, emitting sighs. You must thrive in spite of yourself; and so that you may do it, God takes out your heart of flesh, and gives you a heart of stone.

And yet, you cannot place the blame on one man. That is the beauty and the horror of Bring Up The Bodies. Cromwell is a puppet master pulling strings and slowly the fiction he spins becomes more real than the truth. There is little good in the world of Bring Up The Bodies, and no one to trust. It is a series of wrong choices, unthinking decisions, and bloated egos that lead up to the fall of the Boleyns, and pave the way to the undoing of the man orchestrating it.

Consider Anne. Coaxed into wooing Henry by her greedy family, wary of being cast aside like her sister, Anne is composed of strength and determination. But it is so hard to summon sympathy for someone so conniving and heartless. The woman rejoicing in the death of Katherine of Aragon. Anne of Wolf Hall was feisty and attractive. In Bring Up The Bodies, she seems old, burdened by the expectations of the King. But the fleeting pity she conjures in you is squashed. Still just as boastful, it is her very spirited coquetry that breaks Anne. After her arrest, Cromwell observes her crumble. He does not consider her guilty of the crime. To him, she suffers not because she has been caught, but because she has failed, lost Henry to another woman. Anne is dead to herself, he says. And Mantel writes about how Anne laughs during her final days, clutches her neck and jokes about being beheaded. Those moments leave you shaken. And her ending builds a lump in your throat.

Henry, though, is in no uncertain terms, excuse the bluntness, a pig. Mantel describes him as imposing, intelligent, handsome, jovial; he exemplifies the entitled brat, revelling in the luxury of having so many at the mercy of his whims. A god-fearing man, Henry never fails to invoke the holy name when it suits his cause. He is used to getting his way, a child who wants a toy and will tell all manner of lies to get it. Mantel brings out his hypocrisy in such funny moments as when Henry accidentally refers to Katherine as his ‘first wife’, and sheepishly takes it back – the reason for their divorce having been the fact that he did not consider the marriage real. But you see, Henry of the first book was this lost lamb. What he did to Katherine was scandalous, true, but Anne’s fall makes him the devil who will go on to destroy every life he touches. The sinking realization is, he is only getting started.

Jane Seymour. There is so much and so little to say about her. The final book should display the fullest intrigue of the third queen, the one Henry VIII is supposed to have truly loved. Till then, I will let Mantel’s enchanting writing speak for itself,

He asks Jane, ‘Would you do anything you can, to ruin Anne Boleyn?’ His tone implies no reproach; he’s just interested.

Jane considers: but only for a moment. ‘No one need contrive at her ruin. No one is guilty of it. She ruined herself. You cannot do what Anne Boleyn did, and live to be old.’

He must study Jane, now, the expression on her downturned face. When Henry courted Anne she looked squarely at the world, her chin tilted upwards, her shallow-set eyes like pools of darkness against the glow of her skin. But one searching glance is enough for Jane, and then she casts he eyes down. Her expression is withdrawn, brooding. (…) French hood, gable hood, it is not enough. If Jane could veil her face completely, she would do it, and hide her calculations from the world.
What a solid second instalment. In case you haven’t guessed it by now, I highly recommend these books. I cannot wait to read The Mirror and The Light, the end of Thomas Cromwell’s tragic story, sadly yet to be published.

5 thoughts on “Bring Up The Bodies by Hilary Mantel”