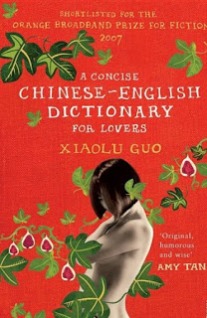 A Chinese woman, Z, moves to England to study English, a language she greatly struggles with. Z carries around her Concise Chinese-English Dictionary wherever she goes. When Z moves in and falls in love with an older Englishman, her struggle deepens. As their relationship grows, Z blossoms from the shy peasant girl into an independent woman. Sent off by her boyfriend on a solo trip around Europe, Z begins to understand and slowly challenge her idea of love.
Written in broken phrases and half baked sentences, a beginner’s stumbling English, a foreigner’s cautious steps, the novel is a humorous study of language and expression. Not quite a love story, it is a tale of culture shock and sexual awakening. The book was short listed for the 2007 Orange Prize.
Of all the Goodreads reviews I read of this book, I particularly loved one. I am going to model my review on this one. Things I liked and notes I made:
1. Chinese words are awesome. Often in the book, Z teaches us bits and pieces of her tongue, and they make for a fascinating read. People interest themselves in finding out the roots of modern English words. I found the strange compound words in Chinese far more delectable. Potato literally translates as ‘earth bean,’ vagina as ‘dark tunnel’, and dandelion as ‘fairy maiden from the water.’ This reminded me of one of my favourite German words, the one for light bulb, which literally translates to glowing pear.
2. Language alienates, brings closer and shapes people. Z learns best when she immerses herself into her relationship, she learns the most English from her boyfriend. That said, he is tired of her simple words, of having to speak slowly to her, of having to explain. In her meagre words, he seems like a silhouette of a real person. His letters and journal entries reveal more of him. You never fully understand Z, because she can’t express her real self in the limited language. A couple of times this frustrates her too, and she bursts into Chinese characters that the editor translates for us.
3. The influence of Chinese does interesting things to Z’s English. Strange turns of phrase like, “I feel a concentrate of love for you,” or “I breathe in your breath. I inhale your exhale,” or “The sunlight is like a knife cutting the earth, half of the world is in the shadow, and the other half is bright. It is like a black and white movie, and everything is in slow motion.” Free from the constraints of form, Z’s English is fluid and delicate.
4. Europe from an average Chinese pov is funny. This description of Berlin,
“The morning wind is washing my brain, and my small body. This is a city with something really heavy and serious in its soul. This is a city which had big wars in its history. And, I feel, this is a city made for man, and politics, and disciplines. Like Beijing.”
and this of Venice,
“I am staring at the water. Is this the sea? A real sea? I can’t even see the colour of water in the dark. It is very different the sea on pictures or in the film. How could be possible a city still stands here without sinking? I thought a sea is boundless. I am disappointed.”

and this of Dublin,
“When I was in China, I thought Dublin is in the middle of Berlin, because that’s how Chinese translated the word ‘Dublin.’ Also I thought London is in the middle of the whole Europe, because Britain sounds so big: ‘the empire on which the sun will never set.’ So London must be in the centre of Europe, just like the Chinese character for China, it means a country in the centre of the world.”
and every single other one of England. There are a lot of observations on people worrying about weather, and acting confusing like the weather. There is also a lot of tea.
5. Z’s culture shocks never stop. When talking about Z’s sexual awakening, from dating a bisexual, buying a condom to watching a strip show, the writing unfortunately falls into corny cliché, with lots of caves and deltas and birds. The other aspects of culture shock are better related, Z’s surprise when she learns how the Chinese are perceived by the English. She continually talks about Chairman Mao and has Communism jokes thrown at her, but to this dry English humour, she is wholly oblivious. She learns that her point blank honesty is rude, that her assumption that her lover will pay the bills is improper, that her curious questions make her sound stupid. It is a difficult terrain, and she traverses it delightfully.
6. Z has a tricky relationship with her parents. She loves them and hates them, and you get a mild blast of culture shock every time she talks about them. I could never tell if the straightforward tone was mocking or earnest.
“My mother had very bad temper. Maybe she hated me because I was an useless girl. She cannot have the second children because we have one child policy. Maybe that’s why she beated me up. For her disappointment. Life to her was unfair too. She was beated up by her mother for marrying my father.”
7. Biggest takeaway: look beyond the words. “Words are void.” Empty space, they are simply the vessel for meaning. Even a crooked pot holds water, and when you’re thirsty, that is what matters.
A Concise Chinese-English Dictionary For Lovers by Xiaolu Guo is a cool book with frequent dollops of wisdom. A very breezy read, and if not much else, it will make you laugh and smile and learn a little more about this vast culture.