This review is part of the R.I.P X  Challenge. Visit The Estella Society to learn more. 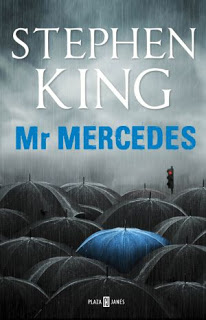 Bill Hodges was once a detective, one of the finest of the city. Now retired, he is a fat lonely TV-addict going over his mistakes and contemplating suicide. That is, until, Bill receives a goading letter from the perpetrator in his greatest unsolved mystery – the Mercedes Killer. Brady Hartsfield, also known as Mr Mercedes, was responsible for spree killing eight innocent people when he drove into a queue outside a job fair in a massive stolen Mercedes. Today, he is not happy that his glory days are over. Taken by another urge to kill, Brady plans to taunt the ex-cop into killing himself. But what the letter really does is jump start a dead investigation. This time, Brady may not get away so easily.

“Every religion lies. Every moral precept is a delusion. Even the stars are a mirage. The truth is darkness, and the only thing that matters is making a statement before one enters it. Cutting the skin of the world and leaving a scar. That’s all history is, after all: scar tissue.”

Mr Mercedes is a very basic mystery. The killer’s perspective is introduced early into the book, the crime is long over, the clues are in place, it is up to Bill to figure out what we know. Mr Mercedes will guarantee you a swift exciting afternoon. And I love this grown up Stephen King who has so many master works under his belt, he can  go back to the basic. And nail it. I am reminded of something King said about Rowling’s pseudonym, “What a pleasure, what a blessed relief, to write in anonymity, just for the joy of it.”


He may not be anonymous, rather the opposite, but perhaps it is the comfort of knowing he will be read and criticized either way, same old, that gives his writing an honesty. Every line in the book tells you he is enjoying himself. Maybe his books just don’t fall prey to editing as frequently now that he is so established. So the book is full of classic Stephen King tricks. Name-dropping taken to a whole new level. He hurls jabs and praises at every crime show you have ever seen, from Dexter and The Wire to NCIS and Bones; I cannot imagine how many legal department people must run around to get Stephen King permissions. At one point, someone mentions the scary ass clown living in the sewer from that TV movie – that’s right, one of King’s myriad pop culture references is to himself.

Stereotypes abound the novel. The serial killer is an ice-cream man, because “everybody loves the ice-cream man.” The fat ex-cop sits on his La-Z-Boy every day, and every day puts a gun in his mouth wanting to off himself. As he gets his life back together, he loses weight, and as he becomes slimmer and more attractive, he starts to believe more in himself. I don’t think Stephen King has a problem with fat people. He simply knows how the world thinks, and this sort of stuff resonates, if reluctantly, even with our “ever-ready to prickle in offended indignation” sensibilities. Peter Straub once said that he has a ‘connoisseur’s appreciation of fear.’ Well, Stephen King similarly understands stereotypes, he appreciates their existence so to say, and manipulates them delightfully.

[Edit: adding important afterthoughts] Stephen King usually writes about alcoholics, murderers and crazy fans. The woman who owns the Mercedes the killer used is one of the best characters in this book. This harmless ‘good citizen’ has to deal with her unwitting involvement in a crime of such great proportions. She is an example of the lengths normal people could go to convince themselves that “such things don’t happen to them,” that the thing they hit on the road that rainy night was just a dog, nothing else, of course. One of the coolest things in this book is the cop describing how desperately people all want to cling on to the comfort of normalcy.

Another thing that King hits the nail on the head with here is humour – dark sly humour. He makes you chuckle with one-liner-musings, sure, but also with these misplaced comedic situations, like someone accidentally poisoning the wrong victim. Jokes that make you wish you hadn’t laughed.

“Hodges has read there are wells in Iceland so deep you can drop a stone down them and never hear the splash. He thinks some human souls are like that. Things like bum fighting are only halfway down such wells.”

A trillion pop culture references, dramatised clichés and forced resolutions make up this story – but what an enjoyable ride it is! Some may call it lazy, cocky even. But some sixty books and a dozen awards into his career, this man has earned his cocky. I realize this review may across as a defence, but it is more than that. I have consistently found it impossible not to fall in love with everything Stephen King writes, and here is why. Even in his smuggest writing, you see a simple yet rare dedication to the craft. Some of his books work and some just don’t – this rests somewhere on a fence. But you can see he loves to write and that, to me, makes even his basic cosy mystery far different from a formulaic success on a best seller list.

In a word, Mr Mercedes is cool. I cannot wait to see what its sequel has to offer.