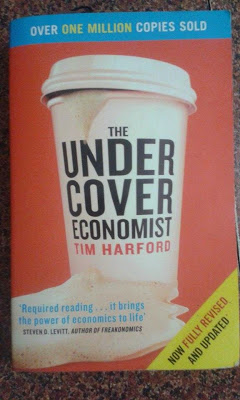 A long time ago, I read Freakonomics and decided “pop economics” was not my breed of non-fiction. This was a mistake, because my problem with Freakonomics had mostly to do with aesthetics. Dubner’s writing was gimmicky, overeager and his cult-like devotion for Levitt was plain creepy. The Undercover Economist by Tim Harford came recommended as a simple but interesting book on economics for people who know nothing about it, i.e. me.
In this book, Harford fancies himself a detective, going undercover to unearth the big stories behind simple daily interactions. But it is his approach that makes the book so appealing, especially to beginners. Like every teacher ought to, Harford steps down from his pedestal, takes your hand and guides you through the investigation. You are the undercover economist. Where Dubner spends the introduction of Freakonomics effervescing with praise about Levitt, Harford makes you the star of his show-

“My aim in this book is to help you see the world like an economist. (…) It’s detective work all the way, but I’ll teach you how to use the investigative tools of the economist. I hope that by the end, you’ll be a more savvy customer – and a more savvy voter too, able to see the truth behind the stories that politicians try to sell you. Everyday life is full of puzzles that most people don’t even realize are puzzles, so above all, I hope that you will be able to see the fun behind these secrets.”
His writing is witty, engaging and full of life. With non-fiction, I know, writing style faux pas might easily be forgiven. But when an author nails the style, it is worth the mention.
Where Dubner and Levitt show how economics can be fun and wacky, Tim Harford talks about things that are a lot more relevant to people all over and gives you an economics-way of looking at things. The Undercover Economist explains the basics of economics and why you should care. The book is well organized. It starts with concepts smaller in scope, like the cost of coffee and orange juice. The initial chapters discuss price-targeting and the power of scarcity through everything from high rents in London and the price of popcorn at the cinemas to trade unions and resistance to immigration. For instance, have you ever wondered why wine is more expensive in restaurants?

“Because one of the big costs in a restaurant business is table space. Restaurants would therefore like to charge customers for dawdling, but because they can’t do that, they charge higher prices for products that tend to be consumed in longer meals, like wine, appetizers and desserts.”

Whenever Harford introduces economic jargon, the technical terminology comes with lay explanations. It is not until the fourth chapter that Harford attempts to define economics, and even then, what he says is comforting, if naive.


“Most economics has very little to do with GDP. Economics is about who gets what and why. There is much more to life than what gets measured in accounts. Even economists know that.”

With every chapter, Harford goes on to more macro concepts, from health insurance to globalization, until it ends with an awesome coming-together of all you’ve learnt till then. He may not do any ground-breaking theorizing of his own, but in the final three chapters, Harford cites the works of other economists, and expands on three globally pertinent topics – the impact of the spectrum auctions, trade barriers and poor countries and a brief history of China under Mao’s rule and its later economic reform. The last chapter is attractively titled How China Grew Rich and the book ends on a positive (though fairly controversial) note.


“In the end, economics is about people – something that economists have done a very bad job at explaining. And economic growth is about a better life for individuals – more choice, less fear, less toil and hardship.”

Yesterday I finished another book called The Articulate Mammal by Jean Aitchison. It is a simple and interesting introduction to psycholinguistics to those who know nothing about it. I am not those people. To me, the book is simplistic and biased, Aitchison focuses a lot on Chomsky, and little on his critics. I mention this because the same may happen with The Undercover Economist if you are not new to economics, unlike me. Especially if you are not in favour of some of the things Harford holds an obvious bias for, like free markets, or if it infuriates you that he concludes the book stressing that “sweatshops are better than the alternative”. Dear econ-nerds, discount him his stronger opinions and appreciate all the knowledge he has packed into this book. For the rest of you lay people, this is a must read. The Financial Times blurb on the first page says it best, “The Undercover Economist is an excellent Undercover Introduction to Economics. If you think that sounds boring, you probably ought to read it.”

(Participate in the 2015 Non-Fiction Reading Challenge over at The Introverted Reader.)

2 thoughts on “The Undercover Economist by Tim Harford”