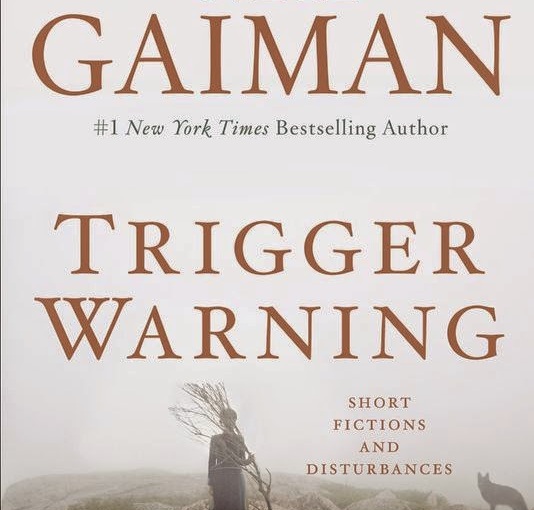 I received this book from the publisher in exchange for an honest review. The book will be published on February 3, 2015, and is available to pre-order on Amazon. 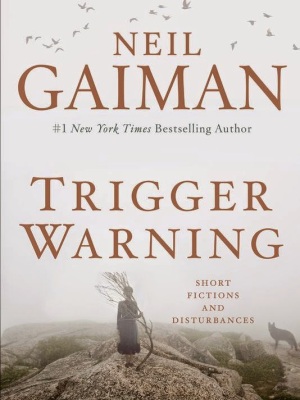 There are still things that profoundly upset me when I encounter them, whether it’s on the web or the word or in the world. They never get easier, never stop my heart from trip-trapping, never let me escape, this time, unscathed. But they teach me things, and they open my eyes, and if they hurt, they hurt in ways that make me think and grow and change.
There are things in this book, as in life, that might upset you.
Many of those stories end badly for at least one of the people in them. Consider yourself warned.
Writers being introspective about their writing is pure magic, which is why Trigger Warning: Short Fictions and Disturbances is a must read, if only for its twenty page introduction. Gaiman writes about how this short story collection came into being, muses on how you need fiction to reveal hard truths to you and to see the world for what it is, and then he generously gives you some back-story on each story.
These are stories that are vivid and evocative and will make you think, for long hours after. The Thing About Cassandra is about a made-up girlfriend, a haunting story that could make you lonely and nostalgic and wonder if reality really is more than hazy wisps of memories. The Sleeper and the Spindle, which was first published as an illustrated fairy tale, is a rich retelling of Sleeping Beauty with a fabulously feminist twist. Down to A Sunless Sea is a short read, but one so filled with defeatist grief that it left me shuddering, and Gaiman’s trigger warning finally made sense. Here are things you don’t want to read about, that can and will horrify you, that are better left unread, that you therefore must read.
Often when I read short stories, I feel like it’s a lifetime badly crammed into a few pages. Every carefully chosen word goes against every haphazard detail of real life. Yet, the way short story plots easily twist and spin also seems unreal. Perhaps there is an art of reading a short story I should learn, a way to add credibility to this package of unreliable oddity bursting at its seams. Jerusalem is a story that could suffer from disconnectedness. It’s not traditional, and reads like something by A. S. Byatt. I think it survives because of its ending, which is refreshingly clear, practical. The story is about love and faith. It’s about unconditional acceptance too. It had something of a hold on me, specially, because the way it is written reassured me there’s more than garbled symbolism to “literary” fiction.
The Man Who Forgot Ray Bradbury is a gem, incomparable in its desperate persistence. It’s about a man confronting a gradual loss of memory, of words, and ideas, and it’s an urgent plea to the world to remember the writer who showed us the power of books.
In The Truth Is A Cave in the Black Mountains, Gaiman has taken fairy tale tropes like heroes, quests and lost fathers and put a spin on them. This is a bleak Dickensian tale of cold vengeance. It’s an intriguing story. As is Kether to Malkuth, a delicately woven tale about an old duke and his search of meaning. These are what I know and love Gaiman for, the dire but charming fantasies.
Orange is a story written in the form of answers to a questionnaire. It’s a highly experimental structure and a dark absurd story. A girl answers a top-secret-government-business-sounding questionnaire, detailing an incident where her sister apparently turned into a giant orange blob of light. You don’t know the questions, which would make this an interesting book club read. It would be endlessly fascinating to see every reader fill in the blanks constructing her own unique versions of the events.
Other favourites of the collection: Feminine Endings – a chilling love letter written by a man who poses as a statue, Adventure Story – a quirky whimsical tale that will appeal to everyone with a mother, Click-Clack the Rattlebag – a disconcertingly simple horror tale, and And Weep, Like Alexander, a moral story like no other. It’s a treat to revisit the Doctor and Amy in Nothing O’Clock, and the occasional poem comes as a welcome change.
But for all the great stories, Trigger Warning is a mixed bag. Sometimes Gaiman’s writing seems so pointless, you have to remind yourself it’s probably not and sieve the text for deeper implications. Not every story in this collection makes me call him, with full conviction, a good writer. Some stories have lost their way, some require too much effort from the reader and others are grand attempts that have ended up, for lack of a better word, flimsy.
The charm of this collection, which you may call haphazard in style and genre, lies in its variety: it is deliciously eclectic. And that’s the thing about Neil Gaiman: you just cannot nail down his style. He’s the king of unpredictable. There are stories in this collection, fables steeped in mythology, which seem very typically Gaiman until, one unique tale pops up that leaves you stunned and somehow devastated, because you had only just begun to believe that you knew him.
So, I would recommend this book to those who have read Gaiman, have already once been caught unaware by his genius and are eager for more. Trigger Warning is a must read for fans. It’s probably not the best place to start for curious first-time explorers of his works.