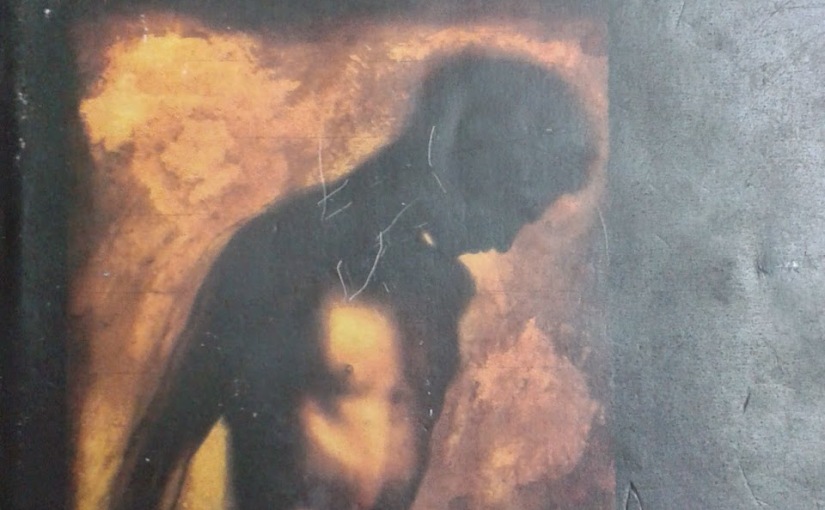 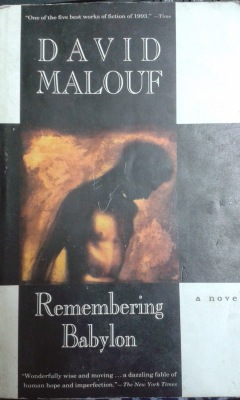 Summary (from the cover): In the mid-1840s a thirteen-year-old British cabin boy, Gemmy Fairley, is cast ashore in the far north of Australia and taken in by aborigines. Sixteen years later he moves back into the world of Europeans, among hopeful yet terrified settlers of Queensland who are staking out their small patch of home in an alien place. To them, Gemmy stands as a different kind of challenge: he is a force that at once fascinates and repels. His own identity in this new world is as unsettling to him as the knowledge he brings to others of the savage, the aboriginal.
Excerpt: David Malouf’s writing is not for everybody. Already having read two of his other books, I had a fair idea of what to expect from this one. There is little plot, but this only enhances the reading experience. I can’t think of a better way to recommend Malouf than to give you a taste of his writing. And to embrace the new for this new year, instead of the usual review, I’ll just share my notes on a couple of pages of the book (they may seem unrefined, I warn you, I prefer not to alter notes after I finish the book; keeps them authentic and spoiler-free, right?) First, a few passages from Chapter 3, describing why the settlers are terrified of Gemmy Fairley, the white boy raised by the aborigines –
Of course, it wasn’t him you were scared of. He was harmless, or so they said, and so you preferred to believe it. It was the thought that next time it might not be him. That when you started and looked up, expecting the silly smile, what would hit you would be the edge of an axe. He made real what till now had been no more than the fearful shape of rumour.

Even in broad daylight, to come face to face with one of them, stepping out of nowhere, out of the earth it might be, or a darkness they moved in always like a cloud, was a test of a man’s capacity to stay firm on his own two feet when his heart was racing.

It brought you slap up against a terror you thought you had learned, years back, to treat as childish: the Bogey, the Coal Man, Absolute Night. And now here it is, now two yards away, solid and breathing: a thing beside which all you have ever known of darkness, of visible darkness, seems but the merest shadow, and all you can summon up to the encounter, out of a lifetime lived on the other, the lighter side of things – shillings and pence, the Lord’s Prayer, the half dozen tunes your fingers can pick out on the strings of a fiddle, the names and ages of your children, including the ones in the earth, your wife’s touch on your naked belly, and the shy, soft affection you have for yourself – weakens and falls away before the apparition, out of nowhere, of a figure taller perhaps than you are and of a sooty blackness beyond black, utterly still, very close, yet so far off, even at a distance of five feet, that you cannot conceive how it can be here in the same space, the same moment with you.

What you fix your gaze on is the little hard-backed flies crawling about in the corner of its bloodshot eyes and hopping down at intervals to drink the sweat of its lip. And the horror it carries to you is not just the smell, in your own sweat, of a half-forgotten swamp-world going back deep in both of you, but that for him, as you meet here face to face in the sun, you and all you stand for have not yet appeared over the horizon of the world, so that after a moment all the wealth of it goes dim in you, then is cancelled altogether, and you meet at last in a terrifying equality that strips the last rags from your soul and leaves you so far out on the edge of yourself that your fear now is you may never get back.

It was the mixture of monstrous strangeness and unwelcome likeness that made Gemmy Fairley so disturbing to them, since at any moment he could show either one face or the other; as if he were always standing there at one of those meetings, but in his case willingly, and the encounter was an embrace.
With David Malouf, I always find myself peeling back the layers of the narrative. Wondering about the way the book was written, its structure and linguistic detail is new to me, last time I did it and not well was for Blindness by Jose Saramago (and I don’t do justice to the process in this post, either, but I try) because I always look at a novel as a separate entity in itself, and tend to question a character’s motives, not the author’s. But David Malouf’s story reads like it has been built specifically to elicit a certain reaction in the reader and it fascinates me to find myself falling prey to the author’s schemes, and reacting the way I imagine was intended.
I love the wise honesty of Malouf’s writing, but what I love even more is his understanding tone. His words are like an embrace, they hold the reader close, pull him into the story and in a group hug that takes everybody in, even a character you’d rather label away as a villain. Like in the excerpt: a white man describing the encounter with a black with as much distaste and plain horror, the likeness drawn between the aborigines and the Bogey man scream racist injustice, and so does the fact that Malouf addresses you directly, making you the perpetrator of this criminal opinion. He reminds you of your routine realities, like your wife and children, and your money and your gods, and then he tells you your impression of the black man and his darkness. A modern reader would promptly disagree, would consider the white man barbaric for his unthinking cruelty and the facade of moral correctness. You would find it most offensive to be put in the villain’s shoes. Because you wouldn’t call an aborigine inconceivable, surely not, or assign him a personal pronoun intended for the inanimate, or name him absolute night. I can relate better to the native than the white settler, anyway, personally.
But Malouf doesn’t give up. He goes on to tell you just why you would find the black man inconceivable. He describes, almost justifies in your head, the white settler’s reaction of instant recoil gorily detailing the native’s face as covered with flies. The vivid visual makes you wince, and now the white man isn’t so unjust in his reaction, because you, the informed modern reader, still have it too. This is not to say that he isn’t still in the wrong. The white man’s disgust at the native whose world he is invading does make him a bad guy, but now he is one that you can identify with, which makes him it far less easy to label him bad.
And then Malouf tells you how that hatred comes from fear, which once said sounds obvious, but still needs to be said. And far more importantly, needs to be shown, in the manipulative way that he has where you end up imagining it for yourself. He makes you wonder if, in the white man’s place, you would be as scared of encountering the inexplicable unknown, the new, the frankenstein. And if you did meet, would you shoot at it or let it into your house with a blind do-gooder’s faith that it will not mean you harm? I’m guessing you would choose the latter viewpoint, if not the literal course of action, because you’re the modern reader, aware of the world and your place in it, a little selfless and very thoughtful, comfortable enough in your life to be aware of empathy, but the fact remains that Malouf makes you question yourself. He takes you inside the barbarian’s head. And he manages to make the villain (timid, yes, but) less cruel for one real, if fleeting, moment.
When the author mentions Gemmy Fairley again, you see him in a new light (I love the transparent symbolism, Malouf jumps at every chance to use light-dark visuals throughout the book.) He calls the settlers “them” again, as if returning to his fiction after giving you a brief insider’s glimpse of the European settlers’ plight. Now Gemmy Fairley is the encounter, the white man meeting the blacks, in a more literal sense than running into each other. He is a combination of two peoples who are essentially separate, two ideas and worlds that have so far proved immiscible. The person you had so far into the story only pitied with begins to spell a probably danger. This could be the author giving you a warning, making you wary, to coax you into looking at the following events closely and with less of a self-evident bias. Or it might just be a clever writer putting you in your place by tricking you into sympathising with an antagonist.
There is not much more to the story than playing out a historical-fictional scenario that is a principally clichéd plot: a tarzan- or mowgli-like mixing-of-cultures situation in this case, combined with the stranded-and-rescued type backdrop. It is typical, yes, overdone, perhaps, but that’s the beauty of it, because it makes you naturally look for patterns when you read and Malouf strictly organizes the story to help you look at every stereotype with new eyes. He picks surprisingly simple words, some even sound made up, but his prose still rings heavy, laden with meaning, and the long sentences beckon you to reread, dig deeper. An exercise in interpretation, I’d call this book, and I repeat, it’s not for everybody. But if winding introspection interests you, if you like atmospheric imagery, analysing cultures, questioning belief, deep characterization with life histories, and subtle mysteries, Malouf is an author you shouldn’t miss.

“Wonderfully wise and moving… a dazzling fable of human hope and imperfection.”
– The New York Times