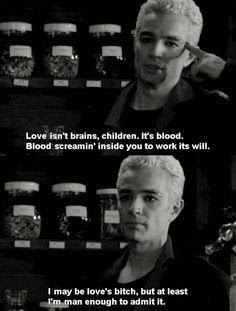 I start the new year with a TV post because this is a blog about writing, and Whedon is one of my favourite writers. Let me just say that this is based on years of Buffy reruns and I haven’t read the graphic novels. I think some stories don’t need sequels and this is one of those. If what I’ve said gets wholly cancelled out in “Angel: After the Fall” or something, I’m perfectly fine being left in the dark about it. There are spoilers for those who haven’t seen the show (in which case, make it your new year’s resolution: watching Buffy. Seriously.)

Once, in the hopes of getting my sister to watch the epicness that is Buffy the Vampire Slayer, I retold her the story of Angel, the vampire who was put under a curse and given his soul back, and his “moment of true happiness” with the slayer that took it away unleashing the terror that was Angelus. Angel has a particular charm about him, being Buffy’s first true love and a classic symbol for redemption, even Giles eventually likes him. Angel’s soul-loss story forms the most effectively narrated Buffy (two-part) episode – Surprise and Innocence, which aired way back in January, 1998. And yet, I’ve always rooted for Spike.

It is the romance of his character that makes him particularly delectable, hidden as it is under all the badassery and platinum-blonde screw-all British-ness. Also, Spike’s story is new, so different from your regular ‘good’ vampire. William is harmless as a human, an aspiring poet with mommy issues, bullied by his peers, rejected by his love, he runs into Drusilla, an insane vampire who bites and turns him. Enter: William the Bloody, also known as Spike for killing his victims with railroad spikes. Spike is unusually passionate which, as a vampire, makes him an especially ruthless killer. However, William’s vulnerability remains in the demon. He loves, or he likely remembers love and empathy more than most vampires.

Around season 5, a long winding chain of incidents leaves him in Sunnydale, in contact with Buffy, with a chip in his head that keeps him from attacking humans. Buffy, who has recently been resurrected into a world she no longer believes she fits in, starts a love-hate relationship with the vampire, the only one who knows what it is like to be undead, and back from the grave. When Spike falls for the slayer, becomes addicted to her more like, Buffy states that the vampire is incapable of loving anything but pain. More to prove a point than anything else, Spike goes through terrible hardships to earn back his soul. And when he does, he is the harmless William again, with memories of the evil he’s done. He goes insane. And he does fall in love with Buffy, now faced with the full and terrible understanding that she could never love him back.

Buffy does care for him. But does she love Spike like she loves Angel? I doubt it. She identifies herself with Spike who has always been a misfit. An evil vampire who could love and a powerless vampire with a chip and then, a vampire who cursed himself with a soul – unlike Angel who had it done to him. She understands his misery, empathizes with it. She meets Angel when he is brooding and repentant, but over the immediate shock of what he is and has done, whereas with Spike she is with him at the point when he is hit by his guilt. Knowing what it means to be a vampire and knowing what he must now live with, she understands that she needs to not be the slayer, for once, for him. She pities him for what happened to him, what he did to himself but over the course of the season, does come to respect him for what he attempts to make of it. Buffy forgives Spike because his strength in dealing with all the crap of first the chip, then the soul and the insanity, then the first evil influencing him overwhelms her.

And through her fondness for Spike, we begin to believe, as does Angel, that she is in love. Which is when we get that moment, that dizzying-ly beautiful scene at the end, before Spike goes down with Sunnydale High when Buffy tells him she loves him, and he replies, “No, you don’t, but thanks for saying it,” and their eyes burn into each-others and the world shatters in our hearts. Because, we know he’s right. Spike is pathetic, till the very end. He is a vampire who is not a glorified monster, not a Stephanie Meyer or an Anne Rice anti-hero, but a creature you actually feel sorry for. Because he was a good human who had a bad thing happen to him. He isn’t about how cool or sexy it is to be an outcast but, especially towards the end, brings out the real dilemma of those who don’t belong. Throughout Buffy we are shown how necessary it is to have connections, and Spike understands it the best. He tells Buffy once that the reason she has survived so long is that she is surrounded by people who know and protect her secret. And in Touched, he becomes the best of those and her greatest comfort. Buffy the Vampire Slayer doesn’t celebrate loneliness unlike most popular vampire series, and Spike perfectly illustrates that. His story reinforces what Buffy is all about – slayer: good, vampire: bad, and makes him the most surprising and complex character on the show.