Skip to content
This post contains spoilers, sorry if you already read something you wish you hadn’t.
Vote for the 250 Greatest Sci-Fi and Fantasy Moments: This has been going around for a while now, and I already voted last week, but I decided to post about it on my blog, anyway.

“SFX’s 250th edition is approaching rapidly. To celebrate, we’re compiling the definitive list of the 250 greatest moments in science fiction, fantasy and horror. You can vote in the poll, so it truly is a democratic list of the moments that have made our genre great. Anything is eligible, from comics, TV, film, books and games. Our experts have hand-picked 250 of our favourites for you to choose from, and here they are.”
You get to pick ten favourites and add one extra “other”. You have until April 30 to vote, and I’m sure, unlike me, many of you wouldn’t really care about voting. But it’s a fun list to go through and you’ll probably, not unlike me, end up all nostalgic. Here are my top three most iconic, memorable moments, one from TV, one from a movie and one from a book.

I’m not big on sci-fi but even I had a hard time choosing three out of 250 – there were at least twenty other moments I loved, along with the rest I voted for in my top ten. The Doctor’s and Rose’s final goodbye, the Firefly scene (I don’t remember which, but come on,) the 1984 Room 101 rat-torture, the Fahrenheit 451 snow scene, Angel, Fringe, the Hitchhiker’s Guide “answer” moment, the… you know what, there are just too many. You might find my blog getting kind of repetitive with Discworld, Stephen King and Whedon references, but I’ll never tire of them – they’re not my favourites for no reason, and: I still do hold that they’re all pretty undervalued. 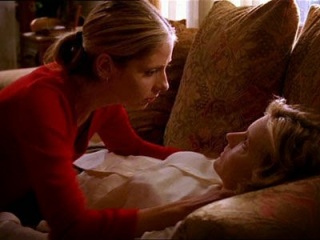 1. Buffy the Vampire Slayer
(Season 5 Episode 16, “The Body”)
Buffy comes home to find Joyce dead, her tough exterior cracks and the slayer can’t even remember how to perform CPR. This was unarguably the best episode of Buffy, and it’s worth watching the entire series if only for this. In the all the horror and gore of the show, the most touching and emotional moments are those which we all face. I have never seen the death of a parent, or any death, filmed so close to the truth, as honest and as touching as this – the helplessness, the disbelief and the horror in her eyes when she calls her own mother ‘the body’ – Dawn’s breakdown when Buffy tells her, in school.. and just the perfect conversation between Tara and Buffy,
Buffy: Everybody wants to help. I don’t even know if I’m … here. I don’t know what’s going on. Never done this… That’s just an amazingly dumb thing to say. Obviously … I’ve never done this before.
Tara: (softly) I have… My mother died when I was seventeen.
Buffy: I didn’t know. I’m sorry.
Tara: No, no, I didn’t mean to… I’m only telling you this because, I know it’s not my place, but. There’s things, thoughts and reactions I had that I couldn’t understand or even try to explain to anyone else. Thoughts that made me feel like I was losing it or, like I was some kind of horrible person. I know it’s different for you because it’s always different, but if you ever need…
Buffy: Was it sudden?
Tara: What?
Buffy: Your mother.
Tara: No… Yes. It’s always sudden.
“It’s always sudden.” and “It’s always different.” – That made at once teary and empowered.

2. Carrie
(1976, the Prom Night pig’s blood scene)
I doubt there is anything quite as terrifying in the WORLD as Sissy Spacek wide-eyed, screaming and covered in blood. No description from the book could have prepared me for that iconic scene. Of course, the book isn’t written linearly. You know what Carrie did (well, kind of) far before she was actually driven to it and you know explicitly the prank they have planned on her, so even amidst all the gore, you know she’s angry and violated and you even feel an inkling pity, and a little of her vengeance makes sense – but in the movie, it’s all so fast and so unexpected. She’s been practising her telekinetic powers, sure, but that scene from that (pictured) pretty and happy into a monster and God, Sissy Spacek is scary. It was effective and unforgettable, even though reading the book meant you knew it.

I had a little argument with myself over which book scene to post – the Hogfather one or the Harry Potter graveyard scene, where Voldemort returns. I posted this because while I’ve read that one more time that I can count, know it by heart, this scene and this book was the reason I fell in love with the Discworld series. It’s the fifth book I read (the first two books, then Mort and the rest of Death’s series.)
It’s time for Hogswatch (the Discworld equivalent of Christmas) but the Hogfather, a fat jolly man who brings presents for the children, has gone missing. To maintain the spirit of Hogswatch, Death (yes, the hooded figure with the horse and the scythe) decides to dress up as the Hogfather, instead. If that doesn’t sound unique, I don’t know what will…
There is also a TV movie, Terry Pratchett’s Hogfather, with Michelle Dockery as Susan Sto Helit’s Death’s granddaughter. Death speaks in unquoted caps, but he has no vocal cords, anyway, so you just hear the voice booming directly in your head. Creepy, right? But he’s a good guy, just doing his job, and if that were not enough, he likes cats.
The conversation:
All right,” said Susan. “I’m not stupid. You’re
saying humans need… fantasies to make life bearable.”
REALLY? AS IF IT WAS SOME KIND OF PINK PILL? NO. HUMANS NEED
FANTASY TO BE HUMAN. TO BE THE PLACE WHERE THE FALLING ANGEL MEETS THE RISING
APE.
“Tooth fairies? Hogfathers? Little—”
YES. AS PRACTICE. YOU HAVE TO START OUT LEARNING TO BELIEVE
THE LITTLE LIES.
“So we can believe the big ones?”
YES. JUSTICE. MERCY. DUTY. THAT SORT OF THING.
“They’re not the same at all!”
YOU THINK SO? THEN TAKE THE UNIVERSE AND GRIND IT DOWN TO
THE FINEST POWDER AND SIEVE IT THROUGH THE FINEST SIEVE AND THEN SHOW ME ONE
ATOM OF JUSTICE, ONE MOLECULE OF MERCY. AND YET—Death waved a hand. AND YET YOU
ACT AS IF THERE IS SOME IDEAL ORDER IN THE WORLD, AS IF THERE IS SOME…SOME
RIGHTNESS IN THE UNIVERSE BY WHICH IT MAY BE JUDGED.
“Yes, but people have got to believe that, or what’s
the point—”
MY POINT EXACTLY.”
________________________________________________________________________
Check out the list and let me know your favourites!