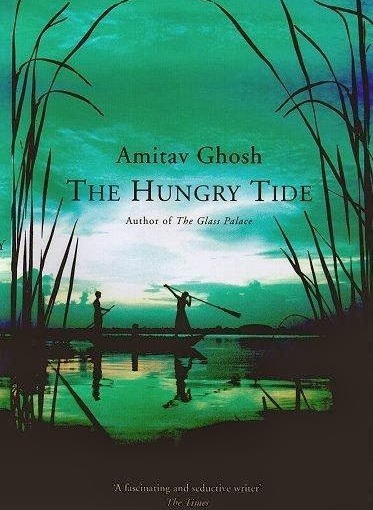 This is a scary book; and the more I think about it, the scarier it gets. I like it, now that I’ve read it: the writing style, the evocative descriptions, the peeking into people’s souls: but I’m still not sure I should have read it. It has some freakish stuff in it, which has been crawling around in my mind for two days. I want to not have read this book and I want to not have liked this book, and you may think I’m overreacting (which I probably am) but all my melodrama doesn’t make that story any less creepy.
Summary: The back covers says: “Off the easternmost corner of India, in the Bay of Bengal,
lies the immense labyrinth of tiny islands known as the Sundarbans, where
settlers live in fear of drowning tides and man-eating tigers. Piya Roy, a
young American marine biologist of Indian descent, arrives in this lush,
treacherous landscape in search of a rare species of river dolphin and enlists
the aid of a local fisherman, Fokir, and a translator, Kanai. Together the three of them
launch into the elaborate backwaters, drawn unawares into the powerful
political undercurrents of this isolated corner of the world that exact a
personal toll as fierce as the tides.”

Another story runs parallel to this one: that of Kanai’s uncle, Nirmal. On finding a diary, addressed to her nephew, belonging to her husband, now dead, whose dream it had been to become a writer; Nilima invites Kanai to her home in Lusibari, where she, as a much loved social activist, runs a local hospital. Kanai, who owns a translation service in Delhi, reluctantly accepts the invitation. The journal reveals to him the darkest secrets of his aunt’s marriage, along with a disturbing account of the plight of the settlers.

My thoughts: Sundarbans. Wow. When I bought this book, I had it all planned out in my head. In An Antique Land made me want to jump out of bed and rush to Egypt, The Sea of Poppies convinced me to visit the Ganga-Sagar and with this book, I was already mentally packing my bags, off to a swampy wildlife-filled adventure. Then, a year later, I read The Hungry Tide. Now I wish the trip had already happened in the year between, because I’m not so sure I want to go any more. Too frightening.
The thing that sticks to my mind, predictably, is that thing about wildlife: tigers – protecting them, to be precise, instead of protecting the people they kill. Piya, as an outsider, and a nature researcher and lover finds the way the people of the village talk about tigers uninformed. The superstitions, fear and hatred associated with the animal seem irrelevant to her. Her reaction and his aunt’s worry over them venturing into the deeper jungle leads Kanai to pose that haunting question. Who rightfully deserves the earth, a classic man versus the wild; except it’s not a matter to debate over coffee but more of a who-kills-off-whom-first and which-death-should-disturb-you-more and what-does-it-say-about-me-that-i-am-more-affected-by-a-dead-tiger-than-a-dead-man.
Like my sister brought up: the story shows that people tend to behave in similar ways, no matter where they’re from or how they spent their lives: Kanai immediately identifies with Moyna, the ambitious girl who wants to make something of herself, get an education, get ‘ahead’ in life; while Fokir and Piya drift automatically closer. Those serene wordless scenes between Piya and Fokir are so aptly portrayed. The relationship between them is fascinating. The striking themes are communication and language. The story is about things left unsaid, and stereotypes and judgments and self-justifications: and understanding each other despite them, which the characters, not unlike us, tend not to.
I’ve come to love Ghosh’s flitting timelines and switching narratives, be it in In An Antique Land or The Calcutta Chromosome – and he is just really good at giving each of his characters a distinct voice. I love Nirmal’s conflicted mind, his inner struggle that makes him your typical unreliable narrator. I love the delicate relationship between Kanai’s uncle and aunt, her practical dedication contrasted with his poetic, if over-idealized, notions of revolution. And I like her love for Nirmal, which, because it lingered despite everything could be called unconditional, which I would rather call habitual.
But: Nirmal’s voice does get too wordy and there are often furious bursts of information where none would have sufficed. Most of the purple prose occurs when referencing the local legends. While the lore about Bon Bibi intrigued me, it could have done without the exoticizing. The Hungry Tide is inspired and the right atmosphere would have been captured without resorting to those tricks that invariably crowd Indo-Anglian writing.

5 thoughts on “The Hungry Tide by Amitav Ghosh”