Skip to content
I saw this survey on book musings. I usually don’t do this sort of thing on the blog (especially since I decided to have ‘no-memes-in-2013’) But this blog has been oddly stagnant this whole month and I hardly have time to read, let alone review. Plus the idea is kind of interesting, and it also gave me the chance to contentedly relive all the books on the awesomeness that is my (relatively) new bookshelf. 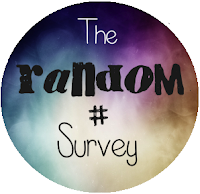 Here’s what you do:

1. Pick a number. (I picked 12.)
2. Go to your bookshelf and count that many books until you
reach your number. Answer the question with that book.

3. Count the same number of books from where you left off
and answer the next question.
4. Repeat until you finish the survey.

What do you think of the cover?

I love it, especially how it totally brings out the 70s carny noirish feel of the book. I love that it’s painted, instead of a photo and that pulp novel font looks awesome, so do the typically vivid colours. The tagline reads “Who dares enter the FUNHOUSE OF FEAR?” It’s all very Stephen King.

2. This Thing of Darkness by Harry Thompson

Write a review in 140 characters or less.

A charming, thrilling, tragic history of Charles
Darwin and Capt. Robert Fitzroy and their life-altering expedition to Tierra del
Fuego.

The blurb’s better: A story of a deep friendship between two men, and the twin
obsessions that tore it apart, leading one to triumph and the other to
disaster. This is my actual review of the book.
3. The Little Stranger by Sarah Waters

How or where did you get this book?

I bought it in time for one of the readalongs for the R.I.P. Challenge, I don’t remember exactly when. I ordered it online, of course, and almost regretted my decision when I noticed it at the library. But it’s a good read to own!


Who’s your favourite character in this book and why?


You can’t really side with someone in an allegory, but I’d choose the narrator, Utterson; the sort of rational view in the book – who exposes Hyde’s evil and Jekyll’s two-facedness (see what I did there?) Or Poole, the ever faithful butler. I don’t like Jekyll as much as I didn’t like Victor Frankenstein, which, I know, was the point.

I remember loving the book when I read it, but that was way, way back then. I’d have to to re-read it to really recommend it. As the story of a convicted murderer and his attempts to escape, the book is thrilling, harrowing and it’s true (or not, there’s a whole controversy) and there was a time I’d have recommended to all fellow bloggers. So why not just try it, right?


How long ago did you read this book?

Funny story, this was the very first book I got for review on this blog. The naive review I wrote for it and the long list of pending reviews on my e-reader right now, makes it seem like an awfully long time has passed since. Turns out I read it in May 2011, though. Go figure.

7. The Ocean at the End of the Lane by Neil Gaiman

Name a favourite scene from this book. (NO SPOILERS)

With way this book dives right into the action, there is little chance of avoiding spoilers. But I remember this scene, among the narrator’s many musing recollections, because the very description pops into my head ever since, every time I feel a cat purr.

“The dread had not left my soul. But there was a kitten on my pillow, and it was purring in my face and vibrating gently with every purr, and, very soon, I slept.”

Open to Page 87 and pick a random quote to share. (NO SPOILERS)

“She looked at him in the exact moment when he turned to look at her. They stood very close to each other. She saw, in his eyes, that he felt as she did. If joy is the aim and the core of existence, she thought, and if that which has the power to give one joy is always guarded as one’s deepest secret, then they had seen each other naked in that moment.”


Oh, how typically Ayn Rand. I did adore Hank Rearden.

9. Playing for Pizza by John Grisham

How did you hear about or discover this book?


I was an unapologetic John Grisham fangirl. I still am! And I’d already read the bunch of legal thrillers at the store, so I got this. Playing for Pizza, a book about an NFL blah-blah quarterback, no less. And even though almost everything in it about football whooshed right over my head, I almost enjoyed this strange, inconsequential little book. The descriptions of Italy, the culture and the oh-so-delicious food made it worth the while.

10. Harry Potter and the Goblet of Fire by J. K. Rowling

If you could redesign the cover, what would you do?

I hate all the covers of my Harry Potter books, except maybe The Order of the Phoenix. All the rest have weird-looking Harrys on them. The adult covers are so much better. But the fact is, I’d have loved it if it was either a close up of the Hungarian Horntail, like her eye and scaly face or something, with no Harry in the picutre. Or a beautiful shimmering Goblet. Or, or, a creepy graveyard, without letting it be a spoiler.

Name your least favourite character in this book and why.

The Witch of the Waste is the villain of the book; she wants revenge on Howl for not loving her back (even though she disguised herself as a beautiful woman for him.) But it was Sophie Hatter, the ‘heroine’, who spent most of the book as a withered old woman because of the witch’s curse, who most often irritated me. She is a much stronger character in the rest of the Moving Castle series.

12. Breakfast of Champions by Kurt Vonnegut


If you like (fill in the blank), then you should try (your book.)

Well. If you like bizarre, inane, often oddly lewd, albeit biting social satire, disguised as fiction, then you should read Breakfast of Champions by Kurt Vonnegut.

I have to add, in nonsense is strength.

Name one cool thing about this book (under the dust jacket, map, font, photograph, etc.)

I pretty much grew up listening to the story of the ‘lioness of two worlds’ from my grandma, who loved the movie. Elsa was an orphaned lion cub who was successfully set free in wild Kenya (for the most part, anyway, she later died; but this story ends earlier, and so, on a happy note.) The book gets bogged down by the details in some places, but the evocative photos make up for it. The photos show Elsa the lion cub, with her cub sisters and the rock-hyrax Pati-pati and later, the lioness all grown up, and still acting like a house cat. She is adorable and the pictures are really cool.

Where is it set, and would you ever want to visit that world / place?

Would I like to be on the Eastern Airlines jumbo jet flight 401, which crashed, killing 101 people? No. Nor would I like on the ships which are haunted by the dead pilot and crew. The writer does mention a cozy writer’s retreat-ey place, where works on his books and it seems like the most pleasantly calm place. I’d love to go there!

Who is it dedicated to?

Who gave me Asgard and the Gods.”

2 thoughts on “The Random Number Survey (Or, A Stroll Through My Bookshelf)”