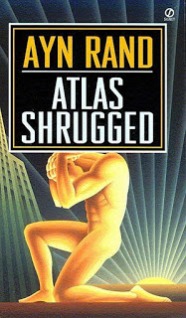 (What I wanted to write was: Reading Ayn Random, but apparently the strike-through doesn’t work in the title.)

My Ayn Rand phase was when I was aged somewhere between 13 and 14. It was a time when I was quite easily influenced by just about anything. I devoured all of her fiction, from We The Living to Atlas Shrugged, and some non-fiction. What followed were proclamations of love for the author and long discussions with my equally love-struck sister.. “Hank Reeardeen” I would coo to her, mostly because everyone else I knew was busy reading Nancy Drews. “Francisco d’Anconiaa” she would coo right back. Of course we both did come out of the phase. That’s one of the few advantages of having an older sister: you get into and out of all kinds of “phases” a lot quicker than people your age. By the time I was 18, every person I knew worshipped Ayn Rand and every girl crushed majorly on Howard Roark.

Some books can only be enjoyed at a certain point in your life, like Catcher in the Rye at one age, The Fountainhead, or On the Road at another. They’re good books, but most of us tend to grow out of them. I say most of us, because, some of us are too smart to ever want to read Ayn Rand’s books to begin with; but since I’m currently all against judging without knowing, I would encourage such people to read the books before ‘hating her’. On the other hand, obviously, some of us do manage to turn childhood heroes into lifelong idols. This post is not really intended as a for and against Ayn Rand, debating ground of sorts. I respect your views if you respect, idolize or worship her. This is just what I think of my once oh-so-favourite writer, today, after so many years.

Her books are good fiction, but that’s about it. She can tell stories, weave you into them, in a way that all she stands for has all the good qualities and all she’s against is despicable, cruel and ugly. The shape of John Galt’s mouth was pride and he looked as if he were poured out of a soft-lustered metal. Jim Taggart, on the other hand, is conveniently found in the most horrible of states, with an unshaven, sometimes twisted face. At one point, even hope looks ugly on him. Everything is so starkly contrasted, so black and white. That is why you agree with her; because you’d be crazy to vouch for Wesley Mouch or any of the “moochers”. The stories are engaging, but for a supposed way of life, there are just too many flaws – like being too extreme or infested with random assumptions.

Many of the ideas she presents couldn’t have been more correct. What bothers me is the way she stretches her theories to try and fit our whole existence into her very specific opinions and that’s where I think the ‘philosophy’ as such tears apart. That this is how things should happen is just an opinion – you cannot simply dismiss the glaring “It could never happen!” Wanting other people to act, think, be a certain way because you like that particular way can also be excused, but it’s ridiculous not to consider that they just might not do any of that. Plus there was the whole thing about someone asking if such people existed and Ayn Rand saying, “If they didn’t, this book wouldn’t have been published.” That had to be the stupidest response. Four people don’t a world make. Ultimately, who the hell is she to decide how man should be, isn’t that something men would decide for themselves?

So. I realize this post has ended up sounding a lot less smart that I would have wished, so I’m going to add a link at the bottom to an absolutely hilarious piece of writing on Rand and hope to redeem myself.

Recently, I read a short play by Ayn Rand and completely loved the overwhelming nostalgia it brought in me. Silly or otherwise, my Ayn Rand phase was one of the most memorable times of my life.

P.S. An absolutely hilarious piece of writing on Ayn Rand.