I received this book in exchange for an honest review. You can view the Rally ‘Round the Corpse blog tour schedule right here. 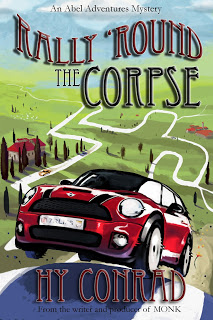 Summary: In the series debut, “Rally ‘Round the Corpse,” we meet Amy Abel, two years after the death of her fiancé.
Amy needs a fresh start.  And what better way for a shy, risk-averse woman to start over than to sink her savings into a travel agency specializing in adventure.  Her first project?  A mystery road rally through the European countryside.
At the starting line in Monte Carlo, Amy finds herself attracted to Marcus Alvarez, the most mysterious of her two dozen game-loving clients.  But the rally gets off to a rocky start when an eccentric writer, the only person who knows the game’s solution, is himself murdered back in New York.
Weird accidents begin happening along the route and Amy discovers that this fictional mystery was based on a real, unsolved case, one that Marcus knows too much about.  Now she has no choice but to join forces with Fanny, her domineering mother, before the killer strikes again.
My thoughts: The idea of the mystery road rally is as charming as it sounds. Well, until all the murdering, of course. But that’s what made me love this book so much. The characters were interesting and the dialogue had me chuckling every two seconds. You hear mysteries described as thrilling, intense, gruesome. Even words like blood curdling are thrown in. But I’ve never enjoyed reading a suspense novel so much before. This book was pure fun, and that is a word I would rarely pair with the word mystery.
Not to mention, the very mystery is great, the plot is brilliantly crafted. It may be because I don’t read mysteries very often, but I doubt that was the reason I just couldn’t guess what was coming, however hard I tried. The plot twists and red herrings just keep coming. I was on the edge of my seat till the very end, which, by the way, did NOT disappoint. Very few writers could reveal the suspense the way the author has: surprising you so utterly, while still managing to be convincing.
A classic mystery fan is sure to love this book. But I do think that people who don’t usually read / enjoy reading mysteries should give this one a try – it might just change your opinion of the genre. It is a quick, engaging read, and I can’t think of a reason not to read it – grab your copies right here, while I wait for the next book in the series!

About the author: Best known for his work in mysteries, Hy was one of the
original writers for the groundbreaking series, Monk.  He
worked on the show for all eight seasons, the final two as Co-Executive
Producer, and received three Edgar Nominations from the Mystery Writers of
America for “Best TV Episode.” In a related project, Hy was Executive Producer
and head writer of Little Monk, a series of short films featuring
Adrian Monk as a ten-year-old.  His latest TV work was as writer and
Consulting Producer for White Collar.

Hy is also the author of hundreds of short stories and ten
books of short whodunits, which have been sold around the world in fourteen
languages.  Hy’s first full-length comedy/mystery play, Home
Exchange, premiered at the Waterfront Playhouse in Key West in May
2012.  He recently authored a humor book called Things
Your Dog Doesn’t Want You to Know. Visit the author’s website right here.

3 thoughts on “Rally ‘Round the Corpse by Hy Conrad”

Leave a Reply to Alexis @ Reflections of a Bookaholic Cancel reply