I discovered Stephen King only over two years ago (it’s sad,
I know), fell in love with horror fiction and read a whole lot of his books in
a very short time. Then I took a two-year-long hiatus from Stephen King (I
talked about him a lot but only read a couple of books here and there) which
ended last week. During the past week I read and re-read some books by King.
These are my mini-reviews of two of them! (more later)

1. Cell by Stephen King
“Mobile phones deliver the apocalypse to millions of
unsuspecting humans by wiping their brains of any humanity, leaving only
aggressive and destructive impulses behind. Those without cell phones, like
illustrator Clayton Riddell and his small band of “normies,” must
fight for survival, and their journey to find Clayton’s estranged wife and
young son rockets the book toward resolution.” (from here.)
I don’t usually like books about apocalypses, irrespective
of the genre (I’m reading The War of the Worlds right now.) They can be
predictable, and often, just pointless. But it’s a Stephen King book, so it
would be wrong if I didn’t like it. I wouldn’t call it one of his better books,
but I was surprised by something which you don’t see very often in King’s works
– a very fast pace. A lot of brutal action starts within the first ten pages of
the book. The story gains a momentum that it doesn’t lose until the very abrupt
and effective ending. Needless to say, the characters are as great as the
story. Survivor’s accounts, as I said before, can be repetitive and there’s not
much room for originality. I read somewhere that the book is supposedly Stephen
King’s homage to zombie fiction; I haven’t read enough books about zombies to
be able to tell. But whatever they are, the idea of telepathic enemies is a
good one, and makes this survivor’s tale distinctive. The book has a lot of
energy and is a quick, involving read. Once I was done reading it, I
found myself revisiting the themes of the book in my mind. The book proves once again, that it is crazy to dismiss King as a genre writer. I would recommend it, though, to only those people who are already familiar with Stephen King: if you’ve never read any of his books, don’t start with this one. 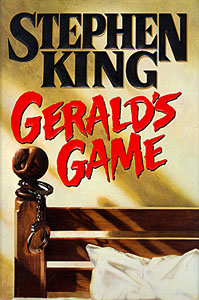 2. Gerald’s Game by Stephen King
“The story is about a woman who accidentally kills her
husband while she is handcuffed to the bed as part of a bondage game,
and, following the subsequent realisation that she is trapped with little hope
of rescue, begins to let the voices inside her head take over.” (from here.)
The shocking number of bad reviews this book has, made me realize that I might just be physically incapable of hating a Stephen King novel. This was a very powerful story, according to me, in spite of the fact that there is little or no plot. In stark contrast to Cell, Gerald’s Game has a slow pace to it that makes one page seem like one hundred. This works wonderfully well to show the terror that builds in the woman, trapped on the bed, for whom every passing second lasts a lifetime. King places you right inside the mind of someone who is scared out of their wits and is gradually going crazy. Put yourselves wholly in the narrator’s shoes and it is psychological horror to the core. I can’t think of anything more frightening. I do think the book is a bit overstretched; it could have been shorter or easier to get through, but it is a gripping story nonetheless. A must read for any thriller, horror fan (who does not read these genres solely for the fast pace.)

8 thoughts on “Just a couple of Stephen King books”