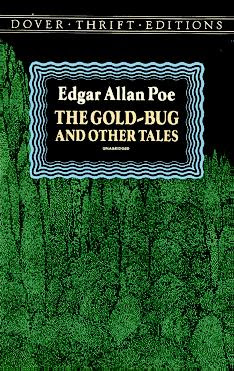 “I say the singularity of this coincidence absolutely stupefied me for a time. This is the usual effect of such coincidences. The mind struggles to establish a connection—a sequence of causes and effect—and, being unable to do so, suffers a species of temporary paralysis. But, when I recovered from this stupor, there dawned upon me gradually a conviction which startled me even far more than the coincidence.”

About the story: The Gold Bug is a short story written by Edgar Allan Poe and is the first story in his Tales of Mystery and Imagination collection (which I am currently reading.) Poe is supposed to have submitted this story to a writing contest and won a prize of a hundred dollars, making it one of his most widely read and appreciated stories, during his lifetime.
Summary: William Legrand, the narrator’s friend, leads a curious life on Sullivan’s Island near Charleston, South Carolina. He lives in a small hut, which he himself built, and along with an old man called Jupiter, engages himself in activities like gunning and fishing; not to mention searching for unique shells or entomological specimens. It is on one such quest that Legrand captures and gets bit by a unique little bug, that seems to be made of pure gold. A month after this incident, the narrator notices his friend still acting very strangely. When Legrand forces the narrator to go on a long expedition into the forests with him, carrying the bug along with them, the narrator is most certain of his friend’s insanity and has all sorts of questions going through his mind; What caused this insanity? Was it the bug-bite? Where were they heading? (which you would have to read the story to answer!)
My Thoughts: The story is very unique and lovely, and the atmosphere, quintessentially Poe; eerie and dark. I loved that though the story is a treasure-hunt, it doesn’t focus on what treasure they found and what they did with it, but the element of mystery and the “drum-roll” or suspense that is built up on the way.
I loved the eccentric characters and the narration. What I really appreciated, was that the narration is very precise. You find out close to nothing about the narrator, making it easy, even, to relate to the story; I could easily put myself in the narrator’s shoes. Also, the narrator sticks to the one story and skillfully avoids writing anything irrelevant to this plot; in fact, even the names of characters other than the ones critical to the plot aren’t mentioned.
Poe was known to have an intense interest in cryptography; and I could see that from the story. The detailed descriptions of the code-breaking and puzzle-solving were very intriguing and entertaining. The descriptions are vivid and there is a tinge of humour to the writing, though the language does take some getting used to.
The story also had ” 53(85;8*+6*3 ”
Read the story and break the code to figure this one out! (Did this convince you to read the story?)
This is definitely one of my favourite short stories by Poe and certainly a must read!