I have been reading less and less short stories lately (and not liking it at all.) So this is may be a day late, but I am participating after two weeks in Short Stories on Wednesday, a bookish meme hosted at Risa’s Bread Crumb Reads. (This is also a part of Peril of the Short Story for the R.I.P. Challenge – I suppose it fits the theme.) 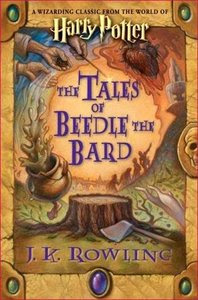 My story this week is a wonderfully gruesome tale from J. K. Rowling’s The Tales of Beedle the Bard, and my favourite one of the five popular children’s fables of the Wizarding World. The Warlock’s Hairy Heart is a dark fairy-tale with a tragic ending, resembling a Brothers Grimm tale! In a way, the story has the strongest message.
A handsome and skilled young warlock, who has all the riches of the world, views love and vulnerability as a weakness. So he finds a way to escape it. The warlock uses Dark Magic to lock away his heart in a dungeon. But separating his heart from his body doesn’t make him more powerful like he wishes; instead he turns inhuman and is either despised or pitied by everyone else. The heart itself, locked away from its natural place, turns black and shrunken, covered with hair – like a beast. The savage heart seeks what it can never gain, a whole human heart. The warlock tries to correct his mistake, but it is too late by then. The warlock’s secret ultimately leads to his own destruction, along with a poor young girl who falls in love with him.
In his notes, Dumbledore aptly describes this story to handle “one of the greatest, and least acknowledged, temptations of magic: the quest for invulnerability.” By dividing what is clearly not meant to be divided (Body and heart. Rings a bell, doesn’t it? It’s similar to separating body and soul, and we all know where that gets you!) and by going against nature, the warlock loses his chance even for redemption.
This is the only story from the book that I found more fascinating than Dumbledore’s notes of it. I would have loved it so much more as a kid. I mean, what’s not to love about a bedtime story that can give you nightmares?