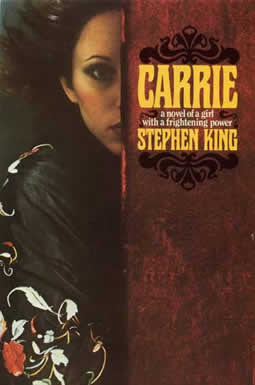 Carrie is Stephen King’s first novel (published in 1974) and is one of the most frequently banned books in schools. I never did read Carrie, because I always thought I wouldn’t like it. Why? Because I already knew most of the story. With three movies and one horrible spin-off, it is hard not to know most of the story. That shouldn’t stop you from reading the book, though. Actually, you know “most of the story” within the first three pages of the book…

“Carrie glared at him with sudden smoking rage. The bike wobbled on its training wheels and suddenly fell over. Tommy screamed. The bike was on top of him. Carrie smiled and walked on. The sound of Tommy’s wails was sweet, jangling music in her ears.”

Summary: Carrie White lives in the small town of Chamberlain, Maine. Being a high school outcast, she has no friends and no life. She is victimized by her schoolmates and abused by her over religious mother. It all becomes too much one day when, after her gym class, in the showers, Carrie gets her first period. Since her mother never bothered to tell her what exactly a period is, Carrie assumes she is bleeding to death. The shock, coupled with a bunch of girls screaming at her, disgusted, telling her to “plug it up” triggers a power in her she never knew she had. This extreme outburst is enough for Carrie White to take control of her (till then only involuntary) telekinetic abilities. What follows is a chain of events leading up to one disastrous night, which is later popularized by the media as the Black Prom.


My thoughts: Like with most of Stephen King’s books, you feel yourself becoming a part of Carrie. It is a quick read and I loved the unique narration. The book is written in the form of newspaper clippings of the Chamberlain incident, science journal articles about telekinetic abilities, personal stories of the Black Prom survivors and book excerpts, all stringed together by the actual happenings in the form of a story. Starting with the first newspaper article, you know what happened in the town. What you don’t know, is how it got to that. Why did the odd teenage girl described in the articles do whatever she did and more importantly, how? You hear the story from so many different perspectives, scientific and personal, that it’s hard to figure out the truth. That’s part of the magic! You get to pick your own conclusion on the story.

Most of the characters are your regular high school stereotypes. Still, what I love about Stephen King’s books is the characters, and he hasn’t done anything short of a great job with these. From Carrie White to the (almost) real protagonist Sue Snell, the book has some wonderful, albeit slightly dramatic, characters. And if not anything else, King has nailed the horror element; the “makes-you-wish-you-hadn’t-read-it-at-night” horror element.

This was definitely a great way to kick-start the R.I.P challenge (though my planned kick-start book was Frankenstein, which I am not done reading.) Carrie is an amazing book and a must read for every Stephen King fan and anyone who enjoys getting completely freaked out!