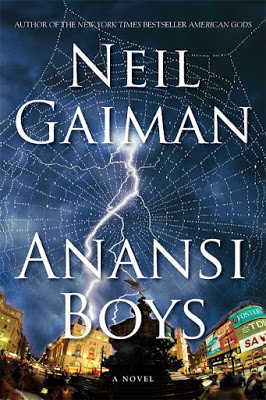 “As a rule, Fat Charlie felt embarrassment in his teeth, and in the upper pit of his stomach. If something that even looked like it might be embarrassing was about to happen on his television screen Fat Charlie would leap up and turn it off. If that was not possible, say if other people were present, he would leave the room on some pretext and wait until the moment of embarrassment was sure to be over.”

Summary: Fat Charlie hasn’t met his father in ages. When he finally agrees to invite his Dad to his wedding, he learns that he has, in fact, recently passed away. Fat Charlie reluctantly goes home to his father’s funeral, not knowing the chaos about to ensue in his life. Accidentally crashing and ruining someone else’s funeral is the least of his worries, because soon Fat Charlie learns not only that he has a brother he never knew about, but also that his father was Anansi, the Spider-god.

Soon, after getting kicked out of his own house and life by his brother Spider, Charlie realizes the full extent of his troubles. After some wonder, much magic and trickery and a load of family troubles, Fat Charlie finally begins to accept and understand his heritage and destiny.

My thoughts: I enjoyed this book. First of all, it is fun and funny. You just can’t help but chuckle after every two sentences. I loved the combination of dark humour and wit.

It is also very engaging. In a wonderfully mystical and slightly eccentric world, Gaiman has spun together a magical story, adding bits of mythology and folklore along the way. If you think about it, though, the plot is normal and the characters are like you and me, people you can actually relate to – they just happen to be gods too; that’s all. There is much more to the book than African legends and children’s stories – you learn about family and courage, and most of all, you learn that everyone has the power to rewrite their story.

This book is very different from American Gods. It is light hearted and much less complex. It may not be my favourite Neil Gaiman book, but it is definitely worth a read (and some re-reads!)