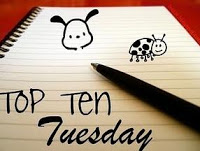 Top Ten Tuesday is an original feature/weekly meme created at The Broke and the Bookish. This week’s topic is Top Ten Awww Moments (moments that made you go “awww”)
Because there’s exactly one month left for the Deathly Hallows Part 2 to release, I’ve decided to dedicate this week’s TTT to just that! Here are my Top Ten Harry Potter Awww Moments:

I bet you’re saying ‘aww’ as we speak.

By the way, I absolutely hated it when Sirius, Dumbledore, Moody, Dobby and Fred died, so no “aww”s there!
What are your favourite Harry Potter moments?