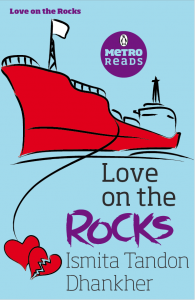 One woman, twenty four men, one ship and one ocean; things are bound to get exciting! Less than a year after their wedding, Sancha and her new husband Aaron Andrews, an officer in the merchant navy, set sail on the Sea Hyena. What Sancha doesn’t know is that only a month before, the chief cook was found dead in the meat locker, the cause of his death an accident. However, following a mysterious theft on the ship, it soon becomes clear that it was, in fact, a homicide. The ever curious Sancha decides to take the investigation into her own hands. List of suspects? Among many of the ship’s “inhabitants”, it could be the obnoxious captain Popeye, the unruly engineer Harsh Castillo, the meek Baldy and not to mention, her own husband. After stumbling upon some evidence, Sancha is left stranded at crossroads, left to choose between love and justice. All the while, there is a psychopath lurking amongst them, and it is up to investigating officer Raghav Shridhar to figure out who it is, before it’s too late.
Love on the Rocks is a romantic thriller written by Ismita Tandon Dhankher. It is the author’s debut book, and a great one at that! Right from the lively cover, to the interesting blurb piece on the back, the book is a wonderful combination of love and trust and spine-chilling suspense.
The plot is full of twists and turns, but it stays consistent. The book is emotional, but without too much drama. It is quick and fast-paced. Right from the prologue, things fall quickly into action! As I read the book, I was reminded distinctly of many Sidney Sheldon books that I used to like.The language is good, with, thankfully, no use of Hindi! However, a little more descriptions would have added colour to the book. There is a tinge of humour to the author’s style of writing, which puts a smirk on your face, and a couple of running gags in the book are bound to crack you up!
The characters are great, but I think the author should have dug deeper into their thoughts. A lot is left to the imagination. A little less dialogue would have seemed better! You hear the story from different perspectives and the author has managed to wonderfully thread them together, not losing the pace of the book at any time. Yet, the only voice that distinctly stands out throughout the book, and leaves a mark on you is that of Manna. If only each of the characters had their own unique way of writing, talking, expressing; the book would have crossed another milestone.
What I liked the most about the book is that there is no pretense of a higher profound life meaning, other than what the characters experience. And why should there be? It is just a great, honest story that deserves to be read.
I’m definitely looking forward to reading more from the author. But as of now, I would recommend this book to anyone who is looking for a fun way to spend some time; it is surely an enjoyable book!
Rating: 3.5/5

2 thoughts on “Love on the Rocks by Ismita Tandon Dhankher”