I was sitting in my balcony today, when I noticed a sparrow perched on a wall of the house opposite to mine. I took out my sketchpad and made a quick sketch of him. Just as I was finishing he flew away. 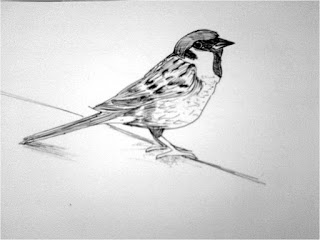 I looked around to see if there were any other sparrows nearby; there weren’t. Then I realized that was the first sparrow I had seen in months, years, even. Where have all the sparrows gone? The bird that you would see everywhere when I was a child, the bird who had led its way into so many of my nursery rhymes – has vanished now. I remembered the story of how ornithologist Dr. Salim Ali developed an interest in birds when he came across a rare Yellow Throated Sparrow. It’s funny how the Common Sparrow is just as rare, now. And who is to blame, but us?
I sat there thinking of the many things that have changed around me in the short span of my life. There are few big trees around, and the houses are larger. There are less number of people on the street, only cars and bikes. There are less number of birds around my house, less chirping, very few of the butterflies that I loved to look at come here now. And we can owe it all to pollution.
Development happens when there is less green and more steel; when children stay glued to computers and mobile phones even in their early teens; when the noise of the traffic is more than the happy chirping of the birds in spring; when the air is filled with so much smoke that you keep your windows shut at all times; when the hills are slowly dug out to build cities and skyscrapers. I wonder what has happened to the world, in such a small time?
I would like to believe that the sparrows have flown off to a better place.

4 thoughts on “Where have all the sparrows gone?”