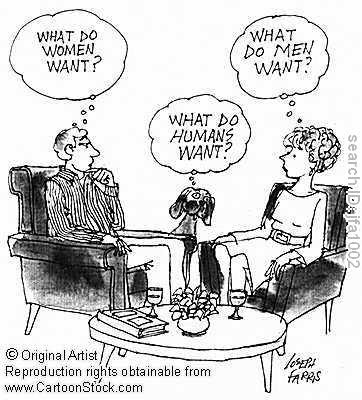 People love to create stereotypes. Or arbitrarily create a set of rules to follow. There are people who make lists like – ‘Ten things women want from men’, and ‘Ten things men want women to know.”. There are people who call the earlier lists rubbish, while listing their own theories about the “Ten things to know about the opposite sex”. And then there are people who laugh at all the lists and proceed to enlighten everyone about “the ugly truths”. What a person wants depends on the person, not his gender. I fail to understand why people just can’t accept that.
I’ll do my part and enlighten you about my theory. The only thing women want now is, I’m sure, to understand what men really want. And vice versa.
So, you see the problem here? While there is no problem at all to begin with, all the wondering what everyone wants creates such confusion that it becomes a problem, which no one is trying to solve, because they are busy wondering what the other person exactly wants. And since no one finds any answer, because there is no answer, the confusion ends bitterly. And then they conveniently conclude that the only reason things didn’t work out was the fact that they didn’t know what the other person wanted. And then, there are new lists. It’s really a vicious cycle, you know.
Now, I’m no expert on relationships, but I can imagine it would be something like this:
The guy decides to talk about his feelings, since he feels that that’s what women want. The girl wonders why the guy, who is supposed to be so simple, is talking about his feelings. The girl figures there must be something wrong. All the while, the guy wonders why ‘talking about his feelings’ isn’t giving the expected results, and gets frustrated. The girl, in the meantime, decides to ask the guy if there’s anything wrong with him. The guy snaps at her, frustrated. And the fight starts…
Or, something like this:
The girl puts on a hideous dress, and decides to tease the guy by asking him how it looks. (I know, girls sometimes do just inexplicable things). The guy dutifully replies, “It looks beautiful”! And the fight starts…
It’s no wonder that people have been perplexed by what the opposite sex exactly wants for ages!
The solution, probably, is to forget all about what anyone wants, and just be yourself. But if that sounds too cliched for your taste, you can continue with your ‘wondering what the other person wants’. I choose the easiest way out – make fun of everyone!

This is in response to ‘What Women Want’, by blogadda with pringoo