I am not, as I say time and again, the kind of person that celebrates any of the ‘days’! But Google’s adorable Mother’s Day doodle just melted my heart!

I mean, just look at it! Very cute 🙂 So. It was Google that inspired this post, and not just because of the doodle. You see, it was Google itself that informed me that there are more “Mother’s Day: Worst Moms in Fiction” lists than the best! (Try Google-ing it yourself!) Which is obviously not how it should be, specially on Mother’s day. So here’s my list of the 5 best moms in fiction!: 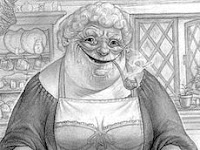 5. Nanny Ogg: From the Discworld series by Terry Pratchett. She is a good witch and is easily the most powerful of the bunch, but she’d rather have a laugh instead. Nanny Ogg is a round and happy person whom everyone loves! She is fun loving, and she definitely has a very motherly air to her, which isn’t a surprise considering she has fifteen children and tonnes of grandchildren! 4. Bambi’s mother: Considering how many animated films I watch (the answer is thousands, by the way) I had to include an animated character! She is one of my favourites from the Walt Disney movie Bambi. I love how she takes care of the ‘little prince’ Bambi, protective and sweet, just like a mother should be! 3. Joyce Summers: From Buffy the Vampire Slayer. I liked her and felt horrible when she died. I mean, you really have to be a great mum to deal the way she did with one of your daughters having super powers, and the other one being a supernatural entity! Special mommy moment: when she hits Spike with an axe in School Hard, saying “You get the hell away from my daughter”!

2. Lorelai Gilmore: I know, it’s kind of clichéd to have her on the list. But come on, she is kind of awesome, even for a 30-something mom living in a tremendously irritating small town. You can see she really loves Rory; and it’s not just the the whole mother-daughter-friendship thing, she also always manages to crack you up!

1. Molly Weasley: Mrs. Weasley belongs to the awesome food-cooking, jumper-knitting, loving and worrying variety of moms that are kind of the reason why we celebrate Mother’s day! She is as good as moms can get. Not to mention, the “Not my daughter, you bitch” moment she had with Bellatrix Lestrange, before killing her; which made her doubly awesome!
Deserving a special mention here, is Fly the sheep dog from Babe, my favourite movie as a kid. She adopts the pig as her own son and proves to be the sweetest adoptive mother a pig could have dreamed of! And there’s Mrs. March from Little Women, of course!
I could have just added them to the list. But a list of seven just doesn’t look as cool as a list of five. Also deserving a special mention is my mother, who wouldn’t really be pleased at the thought of getting a special mention on my blog in the middle of the night, when I am supposed to be asleep. But here’s the special mention, anyway! And another proud mother of…11? 12? I’m not sure! Yes, you’re right. Look to the left, presenting to you the best mommy cat in the world!!
Happy Mother’s Day, people!